Mario has traveled back in time to the 19th century in a new artistic project, “Ukiyo-e Heroes.”

Jed Henry, a recent graduate of BYU, and David Bull, an artist specializing in Japanese woodblocks, recently raised over $300,000 on the website Kickstarter for “Ukiyo-e Heroes.”

For the project, Henry took three of his loves — Japan, video games and illustration — and merged them together. He took popular video game characters including Mario, Pikachu, Kirby and Samus and incorporated them into the Japanese woodblock style.

“I wanted to make a move that would fulfill me artistically but also something that people would want to buy,” Henry said. “As an artist, I can share all these different parts of myself, but as an artist who likes to eat, I want to share the parts of myself that people care about.”

Henry set his goal on Kickstarter as $10,400, but he said he hoped for at least $200,000. His hopes were exceeded when he raised $313,341. Henry attributed part of the success to taking the already popular video game characters and using them in his art. 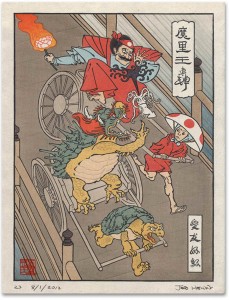 [/media-credit]”We’re riding the trail of what these video games have already done in terms of popularity and exposure, but it was not a bad move,” Henry said. “I wanted as many people to like it as possible. So I’m glad a lot of people did, but you never know because even if you plan something to be successful, that’s no guarantee.”

The process of creating a new woodblock design begins with a lot of research, Henry said. After doing research, Henry does the line work with a real Japanese pen. He then adds color in Photoshop. When the design is complete, it is sent to David Bull, who does the woodblock print. Bull has been running a woodblock print business in Japan for many years.

Jack Stoneman, an assistant professor of Japanese at BYU, also aided in the project. Henry was a student in Stoneman’s class. The idea of the project excited Stoneman.

“When Jed first told me about it, I just knew it would be a hit,” Stoneman said. “I think he had an idea too, that it would be very popular. It’s a great way to bring Japanese culture into the gaming world of the United States but also reinvigorate Japanese woodblock print culture. It goes both directions, which makes it a wonderful project.”

Stonemen did the calligraphy for the wood prints. One of Henry’s pieces, “Rickshaw Carts,” uses slightly altered Japanese Kanji, a system of Japanese writing to convey a deeper meaning. The first characters spell Mario, and the last character is the character for cart, but it is made up of three carts.

“The meaning of three is actually ‘thunderous noise,’ so we’re playing with the idea of the thunderous noise of many carts, but we are also using it to convey the idea of carts,” Stoneman said. “That’s been one of my favorite parts, manipulating the Japanese in order to fill these labels and inscriptions and names of the video game characters with all sorts of meaning.”

Abby Grout,  a junior studying media arts, likes that Henry has modernized a past art movement.

“He’s going back to an older art form and learning how to do it, and I feel like that keeps it alive,” Grout said. “The way that he made the video game characters fit into the old style was something I wasn’t expecting. They look completely different, but the spirit is there.”

“He inspires me to follow my passions,” Hardyman said. “He is doing something that he loves. The project itself is really beautiful, and I think it’s a really cool idea that’s really original. Even more than that, the coolest thing is that he’s taking his passions and he’s finding a way to combine them to do something he is really excited about. I think that’s where you get true success.”