Last year BYU’s Philharmonic Orchestra traveled to China to perform with the Beijing Dance Academy and now they’re teaming up for an encore performance — right here in Provo.

On Wednesday, Oct. 3, The Philharmonic Orchestra and the Beijing Dance Academy will take the stage in the de Jong Concert Hall.

BYU Professor Kory Katseanes has been the director of the BYU Philharmonic Orchestra since 1999 and is currently director of the School of Music. Katseanes said he is grateful for the bonds between BYU and the Beijing Dance Academy.

“While in Beijing (the first time), I wanted very much to collaborate with other organizations there so we could build long-term relationships,” Katseanes said. “One group we thought of was the Beijing Dance Academy, so we submitted a proposal that we would perform while they danced. The dance troupe now has a formal, working relationship with our department.” 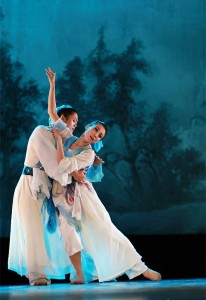 “No one will again have a chance to see ‘Butterfly Lovers’ performed by Chinese dancers,” Katseanes said. “The first time the Beijing Dance Academy had ever performed live with an orchestra was last year with BYU.”

This element of collaboration between the two groups is something that greatly impacted BYU students who visited Beijing as members of the orchestra last May.

Robert Willes, a BYU senior from Cottonwood Heights majoring in cello performance, said he is looking forward to spending time with his friends from the Beijing Dance Academy.

“I am so excited to see the dancers again,” Willes said. “We made friends with the people we met over there, and they are fun and super nice. We communicate with music and dance, and I think there is something really, really meaningful when you can connect with people from the other side of the world through that.”

Nate Hanes, another orchestra member, had similar feelings about BYU and China’s collaboration. Hanes, a senior from Sandy majoring in general music, said the two groups are easily able to communicate.

“The thing I am most looking forward to about this year’s performance is interacting with everyone again,” Hanes said. “That was one of the major highlights from last year: being able to mingle and interact with people our same age. Even with a language barrier, it’s amazing how much we can communicate.”

The performance will occur Wednesday, Oct. 3, in the de Jong Concert Hall at 7:30 p.m. Tickets can be purchased in the Fine Arts Ticket Office in the HFAC, by calling (801) 422-4322, or online at byuarts.com/tickets.