Engagement can be blissful and exciting. That is, until the big storm hits: wedding planning, getting married and going on a honeymoon. If that wasn’t difficult enough, many students are doing it all in the middle of the semester, while trying to stay on top of classes.

Many students get married during a school break. However, some students choose to do everything at once. Despite juggling schedules in the middle of the semester, they give suggestions on why they follow their commitment to get married at this time of their lives. 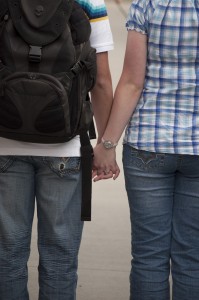 [/media-credit]Kolby Bradley, a senior Japanese major from Mapleton, got married on Sept. 7, while taking 15 credits and working.

“It worked better with family plans,” he said. “Work was very good about letting me take time off. Also, professors are very helpful to let me catch up and helped me to not worry about classes during our honeymoon. Wedding planning was stressful though, because I had school and work and trying to figure out a place to live. Everything was extremely busy.”

He and his wife found a good deal and went to Cancun, Mexico for a week.

“I was able to get to know my wife more on a one-on-one basis while snorkeling and holding hands,” he said. “I still feel stressed sometimes because I have a lot of homework to catch up on, but it pays off to have an amazing roommate.”

Chase Benson, a junior biology major from Temecula, Calif., is getting married in October.

“We got engaged in June, so Christmas or summer is too long of a wait,” he said. “I wanted to do it in August, but she said it was too soon. After talking to all the family members, this is the best date to do it.”

Rather than taking a honeymoon now, he is planning on taking her on an official honeymoon in December.

“Since we both go to school, we will just hang out for a couple of days in San Diego and come back on Sunday,” Benson said.

Many students have found various sources to help them organize their wedding plans, such as friends and family, religious leaders and wedding magazines.

Brynne Wise, a senior from Eagle Mountain majoring in early childhood education, has been married for 11 months. Wise found family members to be especially helpful.

“We had a lot of help from my mother-in-law,” she said. “Of course, there are always the little things that still need to be considered, but we planned as much as we could before the semester began.”

Wise and her husband went on their honeymoon to Kauai, Hawaii, for the week of Thanksgiving break, so they only missed two days of school.

“Going back to school was hard at first,” she said. “Marriage is quite a lifestyle change, all I wanted to do was stay home and be a good wife. It was hard to go back to the same school, with the same classes when everything else in my life had just changed so much, definitely for the better.”