BYU hockey will be back on the ice to face rivals Utah and Boise State this weekend in what should prove to be physical contests.

The Cougars struggled with shot efficiency and goal tending last week. They actively sought out solutions this week by hiring a goalie coach to come in and work on improving the fundamentals needed in the crease. 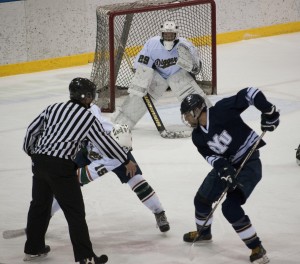 “I think this will improve the confidence of our goalies and of our whole team,” Coach Jeremy Weiss said. “We want to make it very obvious to everybody — our players, our coaches, our fans — that we are putting everything into winning and leaving no stone unturned.”

On the opposite side of the ice the Cougars had no trouble with opportunities to score, amassing 93 shots on net compared to the 46 from Montana Tech. For this reason Weiss has spent a lot of time talking about puck placement.

Weiss hopes this work will help keep games close, especially going into hostile territory against rival Utah and facing a Boise State team that has experienced many of the same struggles as the Cougars in the past few seasons.

The Utes have not yet played a game this season and have looked forward to this rivalry game for the past few weeks. The Utes return several key players from a team that swept the Cougars in all six contests last year, but the Cougars won’t back down in the hostile environment.

“They pack the stands out there,” captain Mitch Facer said. “They shout at us and throw water at us. It definitely gets me going, so it doesn’t bother me if they’re shouting and cheering.”

The Cougars look to maintain their physicality against their rivals, especially in front of the net.

“We have to protect our goalies,” team captain Tanner Billingsley said. “We can’t let anyone get close to them and take hacks at them.”

The teams will meet for the Holy War at the Salt Lake City Sports Complex at 8:15 p.m. on Friday.

Looking to Saturday, the Broncos have been on the same level as the Cougars the past few years, which Facer said has started a small rivalry between the two teams. The Cougars were able to come out on top only once in four close contests last year.

The Cougars will start with home ice advantage and are confident in their chances in the game.

“Historically we’ve matched up very well with Boise State,” Weiss said. “I think that if we play our game there’s no reason we shouldn’t come out with a win.”

The puck drops for BYU an Boise State at Peaks Ice Arena at 7:30 p.m. Saturday.