Many students find their peers adhering to a fashion stereotype within their specific college or major. Lingwall is no exception to these perceptions.

Lingwall stated people who want to be taken seriously should dress accordingly. Upon acceptance into the information systems major, Lingwall changed his wardrobe.

“I discovered that I had a need for more business-casual clothing,” Lingwall said. “I don’t think I wore a dress shirt once in high school or as a freshman, compared to now when I wear a dress shirt around three to four times a week.” 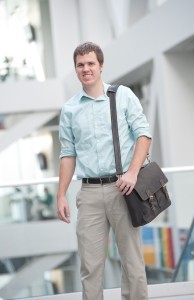 “I feel like the humanities department is all the cultured women who dress fashionably with their necklaces and their accessories,” Baxter said.

Baxter stated his major and college lacked stereotypes due to the causal nature of the students.

“I see a bunch of aspiring doctors and smart, nerdy people who like bacteria,” Baxter said.

Brad Duke, a 21-year-old sophomore from Farmington, majoring in illustration, stated that the different colleges and departments could be placed in stereotypes.

“You are around the same people, so you’re more likely to dress like them or to become more like them,” Duke said.

Other students believe fashion stereotypes do not exist. Kathryn Healy, a 17-year-old freshman from American Fork, claimed students use their choice of apparel to express themselves.

“I think that how you dress kind of reflects how you feel about yourself,” Healy said. “It shows respect for yourself and other people around you.”

Julia Knecht, a mentor for the information systems program at the Marriott School of Management, discussed how fashion stereotypes exist due to the nature of people’s career choices and goals.

“Business casual is an unspoken expectation of the business majors, because we have recruiters on campus and we want to look sharp,” Knecht said. “I feel like every major dresses for what they hope their career will be.”