Jaxon Olsen has experienced a hard and irreversible change of life. But for the better. 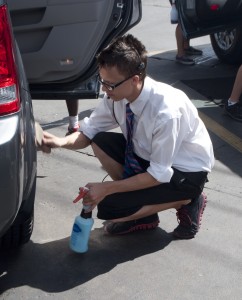 Separated from his mother due to terminal cancer, estranged from his father and living on his own at only 16, Olsen has dealt with the good, the bad and the ugly.

Olsen lived in Lindon with his family of six siblings and parents until his mother died of colon cancer November 14, 2009. After her death, Olsen’s dad did not get along with him, and Olsen has not lived with his family ever since.

“I would never wish my life to be different than it is right now though, even though I’ve gone through some tough things, I have no regrets,” Olsen said, leaning against his chair with a grin.

Olsen spent the past year and a half sleeping on a friend’s couch, but now lives with his sister, Bethany Bayles, in Provo.

Olsen’s coworkers at the SuperSonic Car Wash in Provo describe how these trials have affected him: They haven’t.

Olsen’s manager, Jon McDonald, agreed: “When I was going through my divorce, Jaxon always had something to say to me to make me feel better. Never mind his problems, Jaxon will be there in minutes to help me out. He is the best friend to anybody.”

But it took a while for Olsen to get there. Olsen said after his mother died, a part of him died with her. His relationship with his father had ended, and he felt alone. In pain, Olsen looked for the right things in many wrong places.

A few times Olsen experienced alcohol poisoning and once, even death. 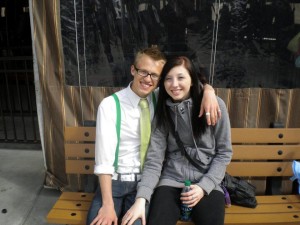 “It got to the point where in Spring 2010 I had to get my stomach pumped. I was dead on the table for a few minutes,” Olsen said nonchalantly.

Olsen’s girlfriend, Sarah Jones, made him realize that being alive is a good thing.

“She figuratively slapped me in the face,” Olsen said. “She put me in the best direction by simply being there for me.”

Jones, also 18 from Pleasant Grove, dated Olsen through the thick and thin of everything.

“It was hard for me, because I didn’t agree with some of his choices, but I didn’t want to push him away either. I knew he needed somebody there for him, so I stood by him through all of his trials with support,” Jones said.

While there were some tender moments, Jones said nothing ever brought him down in any aspect of his life: work, school or love.

Olsen’s life is what made Jones fall in love with him, according to Jones.

“Jaxon is just so thoughtful. Last year, three of his friends didn’t have cars. Every day Jaxon took each of them home after school and took them to their jobs as well. You just don’t see that in your average guy,”  Jones said.

Olsen has been dating Jones for almost three years now, but knew he wanted to marry her at eight months. 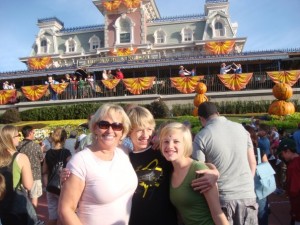 Olsen added that despite how good his life is, he still misses his mom.”Sarah has made me realize what I have always known: true happiness. We have a blast together, every day, every time. I have never had so much fun in my entire life,” Olsen said.

“She was my best friend. Back in high school she would take me out of classes just to hang out with her. My dad and I used to be that close too, but since her death we don’t talk much anymore,” Olsen said.

“She knew the mistakes I made,” Olsen said. “But she wanted me to know that I could become anything I wanted, and that she loved me.”On her death bed, Jaxon’s mother reminded Olsen of his incredible potential. She told him he was perfect.

Olsen plans to achieve his potential by studying at University of Utah medical school and become a radiologist.

“I have a personal vendetta against cancer,” Olsen shouted with determination, shaking a finger in the air.

Olsen has a goal to make cancer something people can relax about, something they can laugh about in memory of how it used to be a serious condition.

“Fear controls people. I know because I’ve been terrified of cancer. Cancer is something you don’t need to be afraid of. With my career, I could help people see that,” Olsen said.

To anyone that knows someone with cancer, or has cancer themselves, Olsen declares one thing.

“Stay positive. It’s the only thing you have control over,” Olsen said.