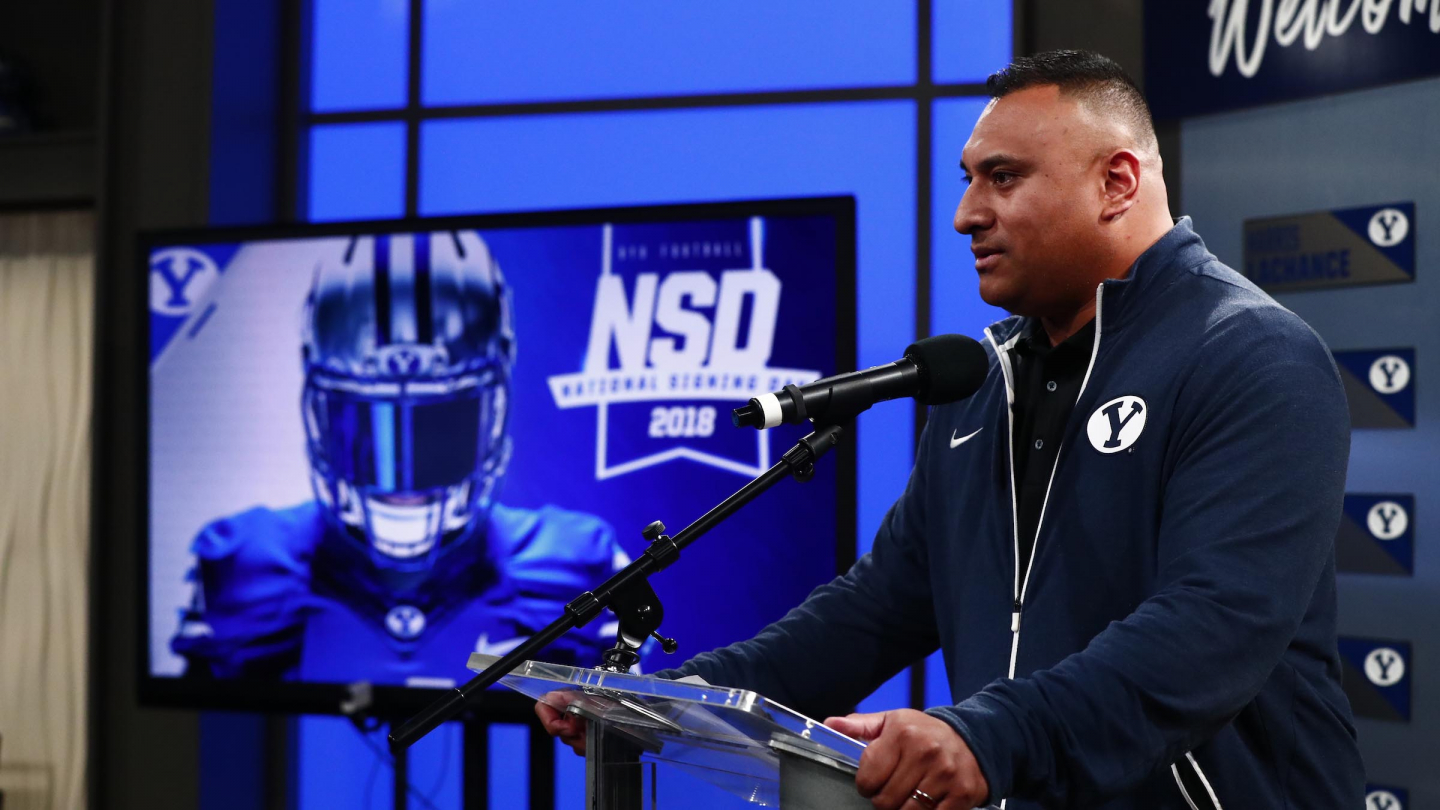 “We’re a bigger, faster and stronger team this year,” said coach Kalani Sitake of this year’s additions. “And we want to say that every year.”

The signing period was split into two parts for the first time this year with the early signing period in December, and National Signing Day in February.

Sitake said this change allowed those who committed early to enjoy more of their Christmas break stress-free and also resulted in less drama surrounding the signees.

The 2018 BYU signing class ranked No. 83 nationally according to 247sports, compared to last year’s No. 66 ranking.

Quarterbacks Stacy Conner, from Wylie, Texas, and Zach Wilson, from Draper, Utah (Corner Canyon HS) signed early and are both enrolled in classes for winter semester, allowing them to participate in spring ball.

Wilson was a three-star quarterback out of high school and committed to Boise State before officially signing with BYU this year.

They join an already crowded group of quarterbacks that will be fighting for the starting spot in the fall. It’s not known whether Tanner Mangum will be healed enough from his Achilles injury in time for spring ball in March.

Also included in the group of quarterbacks are returned missionaries Baylor Romney from Arizona and Jaren Hall from Maple Mountain HS in Spanish Fork, both of whom have brothers on the team.

“One advantage of being at BYU is that we can have size and length at every position,” coach Jeff Grimes said on this year’s group, “and that begins with the offensive line”

Gunner Romney, Baylor’s brother, led the newcomers who committed during National Signing Day on Feb. 7. A 6-foot-3 wide receiver out of Arizona, Romney was the only four-star recruit BYU signed this year.

“He’s a big, strong receiver who I think is not only a talented player, but the right kind of kid,” said Grimes. “The guy is all business and is very serious about his training and has a plan to get here and compete right away.”

6-foot-3 Brayden Cosper, a three-star wide receiver out of Bingham HS, was another big signing that should help a depleted BYU offense that struggled in the passing game last season.

On Tuesday, Feb. 6, it was announced that AJ Steward from Rice was hired as BYU’s 10th assistant who will coach the wide receivers.

Dallin Holker from Lehi, and Ben Tuipulotu out of Fort Mill, South Carolina, signed as tight ends, but will both serve missions before playing for BYU.

Amone Finau, a three-star recruit out of Kearns, was the only running back to sign with BYU this year, and looks to get back into playing form following his mission.

Squally Canada and Ula Tolutau remain on the roster from last year, and should earn most of the playing time with impressive performances despite injuries.

With 10 other running backs still on the roster two back those two up, there wasn’t much more room to recruit in the run game.

Standouts on the other end of the ball include defensive backs Isaiah Herron and Malik Moore, from Las Vegas and San Diego, respectively.

Both are over six feet tall, and possess the length and athletic ability to make an impact in the backfield.

The linebacker position was another strong area for recruiting this year, with three-star players Viliami Tausinga from East HS in Salt Lake, and Oliver Nasilai from Arkansas.

Tausinga and fellow linebacker Alex Miskela will both serve missions before donning a Cougar uniform.

BYU also got 6-foot-5, 270-pound lineman Chinonso Opara out of Juan Diego Catholic HS in Draper. He is originally from Nigeria and also played varsity basketball.

With the departure of New Zealander Jonny Linehan, BYU picked up another punter from the South Pacific in Australian Danny Jones.

“Danny Jones is raw, but one of the fastest, most athletic guys on the team,” coach Ed Lamb commented.

Jones is used to rugby-style punting, but has been training with football coaches in Australia to translate his game to the American style.

Assistant coach Ed Lamb traveled to Australia to recruit Jones, and Sitake reiterated that BYU will continue to look outside of Utah and the U.S. for the best talent.

“Recruiting never stops,” Sitake said. “The goal is to get the best talent on the team, but also respect their personal life, including missions.”

Seven of the 22 players in this year’s recruitment class will serve missions before playing, but the Cougars also welcome back 12 players who already completed their missions.

Sitake expressed excitement over those returning, as many of them were among the first class of high school players he got to recruit when he became coach at BYU in 2016.

All of the coaches agreed that, while some players obviously have more experience within the BYU football system, every player is “in development” and will have equal chances to compete.

Sitake said finding players who are hungry and ready to contribute immediately was one of his primary focuses during recruitment.

“The only acceptable result for us at BYU is to be nationally relevant,” Lamb added toward the end of the press conference, summarizing the staff’s goal when it comes to recruiting and developing players.

After a lackluster 4-9 season in 2017, all eyes will be on the Cougars as they shape the talent they recruited into a team that can win football games come fall.