May 30 – A male reported another male threatening to physically assault him in the Harold B. Lee Library. Both individuals were college-aged.

May 29 – The Utah County Sheriff’s Office is seeking help in locating a drug dealer in the area. The woman was last known to live in the Pleasant Grove area and has five warrants out for her arrest. An officer caught her injecting herself with drugs in January. She was found possessing a syringe filled with heroin and a purse containing additional heroine and meth.

The woman violated her probation on May 15 and has been missing since. She has blue eyes and blond hair, weighs about 110 pounds and is 5-foot-3-inches tall. The Utah County Sheriff’s Office has asked that any information be reported to 801-851-4034. See the image below. 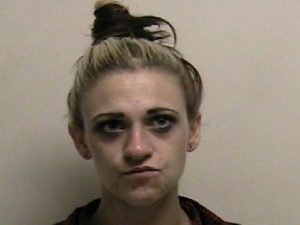 May 30 – The third and final victim of the drowning incident in the Provo River was recovered around 11 a.m. Provo police have asked those in the area to stay away from and use caution around the river to avoid additional tragedy.

May 30 – Police arrested a woman after she assaulted a hospital worker and attempted to take an officer’s firearm. The woman was booked into Utah County Jail on suspicion of a first-degree felony of attempted disarming of a police officer and one class-A misdemeanor of assaulting a healthcare provider. Her cash-only bail is set at $20,000.

May 31 – A woman called medics after mixing meth with baking soda and drinking it. She was taken to the hospital, and police confiscated the rest of the drugs.

May 31 – A woman was arrested for theft after being caught taking items from Walmart and trying to return them for money.

May 31 – A man was arrested for shoplifting. The man was caught trying to steal jeans from Buckle by wearing the jeans under his own pants.

June 2 – Police arrested a man on reports of ransacking a home, stealing furniture from the home and selling it online. The man reportedly entered a home on Jan. 11 and stole several pieces of furniture, causing damage to the home during transport. The homeowner took the man to court and he was ordered to pay the full value of the stolen furniture. The man was given 10 days from May 14 to pay the sum, a total of $30,422. The homeowner contacted police on May 26 informing police the sum had not been paid. The man was booked into the Utah County Jail on Thursday.