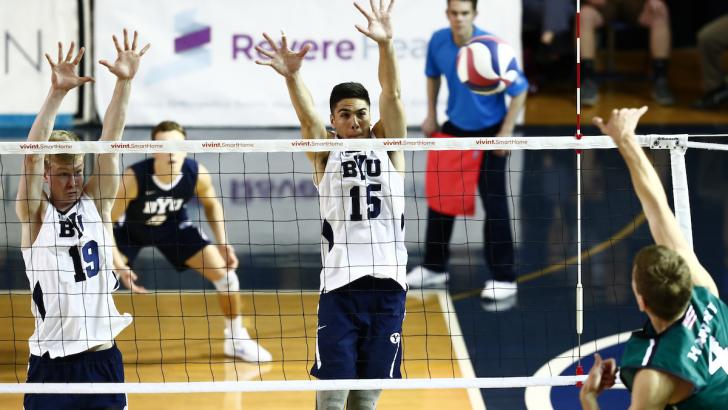 Conference play wraps up as the No. 3 BYU Cougars play their final three games of the regular season this week. (BYU Photo)

Sweeping No. 4 Hawaii on back-to-back nights has put BYU in a position to fight for the No. 1 national ranking against the country’s current No. 1 team, Long Beach State. The Cougars will play the 49ers on Friday and Saturday night.

Outside hitter Brenden Sander talked about the road to Long Beach after beating the Rainbow Warriors.

Long Beach State is 19-2 on the season and 13-1 in conference. The 49ers’ only losses come from No. 2 Ohio State and an exhibition match against a Canadian team, University of Manitoba.

The win against No. 4 Hawaii gave the injury-plagued Cougars a lot of much-needed confidence going into the No. 1 showdown.

BYU has the possibility to move to the No. 1 rank in the country, if BYU defeats Long Beach State — giving the Cougars an edge for the NCAA tournament.

Sophomores TJ DeFalco and Kyle Ensing are the 49er players to watch. DeFalco is averaging 4.1 kills per set, and Ensing follows with 3.4 kills per set. Senior Amir Lugo-Rodriguez averages a team-best 1.3 blocks per set.

But Olmstead said the Cougars are focusing on themselves.

“We’re going to try to focus on us and just getting better and better,” Olmstead said. “We’ve got a top opponent coming into our gym just as Hawaii was, so we need to really apply ourselves to our preparing. Being smart about how we go into this week and to our game plan and then we’ll be okay. I’ll be comfortable with how we get out there and go.”

BYU can’t afford to look too far ahead. The Cougars play Princeton on Tuesday at 7 p.m. MDT. The Tigers have won four of their last six games.

“We got to get more wins,” said Miki Jauhiainen, BYU freshman middle blocker. “We play Princeton on Tuesday and got to get a win there. Then get some rest and play Long Beach.”

This next week is what BYU has prepared for all season: a chance to take the No. 1 ranking and defeat one of the best teams in the nation.