“I just want to say hats off to Long Beach State,” said BYU head coach Shawn Olmstead. “I anticipated a great match and it was. They’re a well-coached team. They pushed our players. It was a fun match to be a part of.”

Both teams showed some nervousness at the beginning of the first set as the match started out with back-to-back service errors.  But BYU quickly took the lead and didn’t look back. The Cougars hit a strong .320 clip with a total of 13 kills to win the first set 25-21.

The Cougars jumped out to a 3-0 lead at the beginning of the second set, but Long Beach State came roaring back and won the set 25-23 after multiple lead changes. Long Beach State had 18 kills compared to BYU’s nine, but nine errors by the 49ers kept the set close.

The Cougars took an early lead in the fourth set going up 4-1. The error-plagued 49ers weren’t able to battle back and BYU won the set 25-18 to close out the match.

Olmstead was pleased with the way his team played.

“I was happy with our boys’ composure after losing that second set and going into the third,” Olmstead said. “We made some really good decisions from there.”

Outside hitter Brenden Sander led the Cougars with 14 kills and no attack errors to hit on a .583 clip. Opposite Ben Patch collected 13 kills and Michael Hatch contributed five blocks. Leo Durkin set the offense with 42 assists and Erik Sikes chipped in a team-high eight digs.

The Cougars will advance to play against the winner of the winner of No. 2 seed UCLA and No. 3 seed Ohio State in the championship match on Saturday. 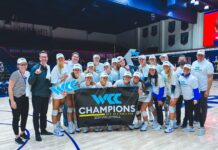