One percent of the world’s population will control as much of the planet’s financial assets as the other 99 percent by the year 2016, according to a report released by Oxfam International.

Staggering statistics like that led to the inclusion of a plenary session on income inequality at the 2015 Parliament of the World’s Religions on Saturday, Oct. 17. The Parliament was held Oct. 15-19 and drew thousands of participants from all over the world and dozens of different religions to the Salt Palace Convention Center in Salt Lake City. Representatives from different faiths performed, presented, and participated in interfaith discussions about major world issues.

Presenters at the plenary session shared the goal of eradicating extreme poverty by the year 2030.

Panelists passionately argued that income inequality is a religious issue, as well as political one, and urged action by faith communities in ways they have not yet been active.

“Income inequality is a spiritual issue, a moral issue and a religious test of our belief,”  said Jim Wallis, the president and founder of Sojourners magazine.

Wallis, along with other panelists, urged participants to look no further than the United States to understand the debilitating causes and effects of poverty.

Wallis cited recent police killings of black men in the United States as a problem that demonstrates the tragedy of poverty and urged Christians to get involved.

“If white Christians were more Christian than white, black parents would fear less for their children,” Wallis said.

“We still, unfortunately, have to own the dubious distinction of incarcerating more people than any other Western industrialized nation in the world,” Nashashibi said. “That is not just an indictment on one group of people.That’s an indictment of all of us, including all faith communities represented here.”

He said no issue is more deserving of the collective spiritual voice gathered in the Parliament and condemned those who say America gives a “second chance” to those in prison who didn’t have a chance in the first place.

He urge faith groups to gather in support of initiatives in every state to help combat the debilitating effects of poverty and to help former prisoners by showing love and support for them.

Michael Bernard Beckwith, a New Thought minister and founder of the Agape International Spiritual Center, proposed a new narrative of compassion and love in the world. “There is not one throwaway on the planet,” Beckwith said, stressing the importance of each individual.

He told urged participants to show more than mere sympathy or passion and use compassion to know how they can serve. “If you ask the question sincerely, you will get an answer that will speak to your language and that you can understand,” Beckwith said.

Kathy Kelly, a guest of the Afghan Peace Volunteers, discussed the poverty she’s seen in refugee camps in Afghanistan and spoke of America’s culpability. She shared heart-wrenching stories of brothers who resorted to fighting over a blanket in order to survive. She spoke also of the transformation these brothers underwent, and the business they started to give blankets to people throughout Afghanistan.

“Refugees all over the world, millions of people, don’t want to leave their homes. They’d rather be where they live, but wars force them to give up what they have and start all over,” Kelly said, adding that the language of love is not enough. People of faith must show courage in naming “the gods of metal” who encourage war and prevent the eradication of poverty.

Participants were also treated to prerecorded messages by the Dalai Lama, encouraging people of faith to engage in acts of love, and by Jim Yong Kim, president of the World Bank Group, calling on people to help end poverty.  The Dalai Lama was originally scheduled to appear at the Parliament, but ill health forced him to cancel his appearance several weeks ago.

More Universe coverage of the Parliament of the World’s Religions:

An introduction to the Parliament of World’s Religions conference

Parliament of the World’s Religions: Opening ceremony celebrates people of all faiths

Parliament of the World’s Religions: Magic demonstrates the golden rule

Parliament of the World’s Religions: BYU faculty weigh in on contraceptive mandate debate

Parliament of the World’s Religions: Powerful women can and do change the world

Parliament of the World’s Religions: How religious identity is used and abused

Parliament of the World’s Religions: Clarifying misperceptions about Islam to defeat ISIS

Parliament of the World’s Religions: Heroism embodied in Mandela, King

Parliament of the World’s Religions brings faces from diverse religions

Speeches, performances, and discussion filled the Parliament the World’s Religions 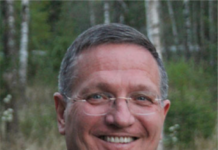