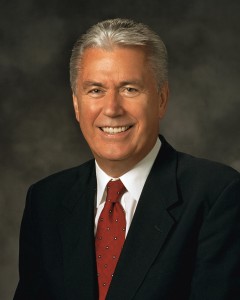 President Dieter F. Uchtdorf emphasized the simplicity of both living the gospel and in becoming disciples of Christ.

The member of the First Presidency recalled how after his surgery, a doctor had told him how to best recover. President Uchtdorf instead took it upon himself to create his own process of healing through internet research.

After finding several outlandish statements on the internet, President Uchtdorf realized that he was disregarding the simple advice of his doctor.

“Sometimes, the truth may just seem too straightforward, too plain, and too simple for use to fully appreciate its great value,” President Uchtdorf said. “So we set aside what we have experienced and know to be true in pursuit of more secretive or complicated information.”

He continued by saying that chasing after shadows is chasing after information that does not have substance or value when it comes to spiritual truth.

President Uchtdorf also explained that for some members, the LDS Church is an exceptional and warm experience in their lives, but for others, church membership is not what they had hoped it to be. He then explained that there are two ways to help both groups have better experiences.

The first is to simplify.

President Uchtdorf suggested that members might be making discipleship too complicated. He was quick to acknowledge that the gospel is both simple enough for a child to understand, yet deeply profound.

He called for church leaders to strictly protect the purity and plainness in the gospel in order to help avoid unnecessary burdens for the members.

He also told members to simplify their lives. He told a story about a sister preparing to give a lesson in Relief Society. She exhaustively stayed up the entire night working to create a beautiful and elaborate quilt she could use as the centerpiece of her lesson entitled, “Simplify.”

“Focus on the basic doctrines, principles, and applications of the gospel. I promise that God will guide and bless you on your path to a fulfilling life, and the gospel will definitely work better for you,” President Uchtdorf said.

The second suggestion is to start where you are.

President Uchtdorf acknowledged that some may feel discouraged because they are not “more” of something.

He was quick to say that members should want to improve and progress, but they should remember that weaknesses can help members become humble and turn to Christ. He also warned that Satan will use weaknesses to discourage members from trying to improve.

“I learned in my life that we don’t need to be ‘more’ of anything to start to become the person God intended us to become. God will take you as you are at this very moment and begin to work with you.”

President Uchtdorf reminded members that Heavenly Father sees us as His children, and that the grace and the Atonement will help us reach salvation.

“Exaltation is our goal; discipleship is our journey.”

Three new apostles to represent Christ throughout the world

English only at LDS General Conference

President Dieter F. Uchtdorf: Now is a part of eternity

Elder M. Russell Ballard: God is at the helm

Elder Neil L. Andersen: Not by chance, but by choice
President Dieter F. Uchtdorf: Be not afraid, only believe
President Henry B. Eyring: You are not alone in the work
President Thomas S. Monson: Keep the commandments

President Thomas S. Monson: Be an example and a light

Elder Ronald A. Rasband: Love one another

President Russell M. Nelson: A plea to my sisters

Elder Claudio R.M. Costa: That they do always remember him

President Henry B. Eyring: The Holy Ghost as your companion

Elder Von G. Keetch: Blessed and happy are those who keep the commandments of God

Elder Allen D. Haynie: Remembering in whom we have trusted

Elder Kim B. Clark: Eyes to see and ears to hear

Elder David A. Bednar: Chosen to bear testimony of my name

English only at LDS General Conference

Music and the Spoken Word: A Mormon gift to the world

Mormons encouraged to review past sessions before General Conference