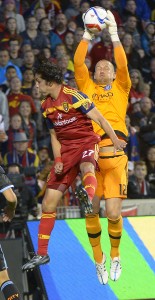 Throughout the game RSL’s attack created six shots on goal while NYCFC struggled with just one. Devon Sandoval had chances on goal but was unable to get on the score sheet, coming up short in multiple one-on-one situations. RSL kept up the pace and secured a goal in the 25th minute. Sandoval headed the ball to John Sertzer on the left side and curled it past the NYCFC keeper. Alvaro Saborio added a tally by scoring on a header from Luke Mulholland’s cross in the 49th minute.

Mix Diskerud and David Villa created NYCFC’s only chances in the first 60 minutes. This is NYCFC’s first year existing as a club. It has yet to win more than one game this season.

The performance today was heartening for the players and coach after a disappointing showing in Montreal. “This was very close to a complete game,” said RSL head coach Jeff Cassar. “It was great to score a few goals tonight, but we also kept them at zero, which was really important,” said midfielder John Sertzer.

“They were better on the ball,” NYCFC head coach Kreis said about his former club.

This was the first game back in Salt Lake City for Kreis and players Chris Wingert and Ned Grabavoy. “It was odd to be on the other side of the field. It was odd to look out on all those players and see them as opponents and not my players. Terrific crowd again,” Kreis said.

Real Salt Lake goes out on the road again and plays the LA Galaxy on May 27 and the Vancouver Whitecaps on May 30.