Earlier that day, they had entered a stadium at least halfway filled with Cougar blue. Fans had shown up en masse, driving for hours and bringing their children out on the frigid November night to see their team.

BYU was plagued with injuries and had just experienced disappointing losses—first to Utah State, then to Central Florida, Nevada and Boise State. What might normally have been taken for granted as an easy victory over MTSU became a momentum-changing conquest. 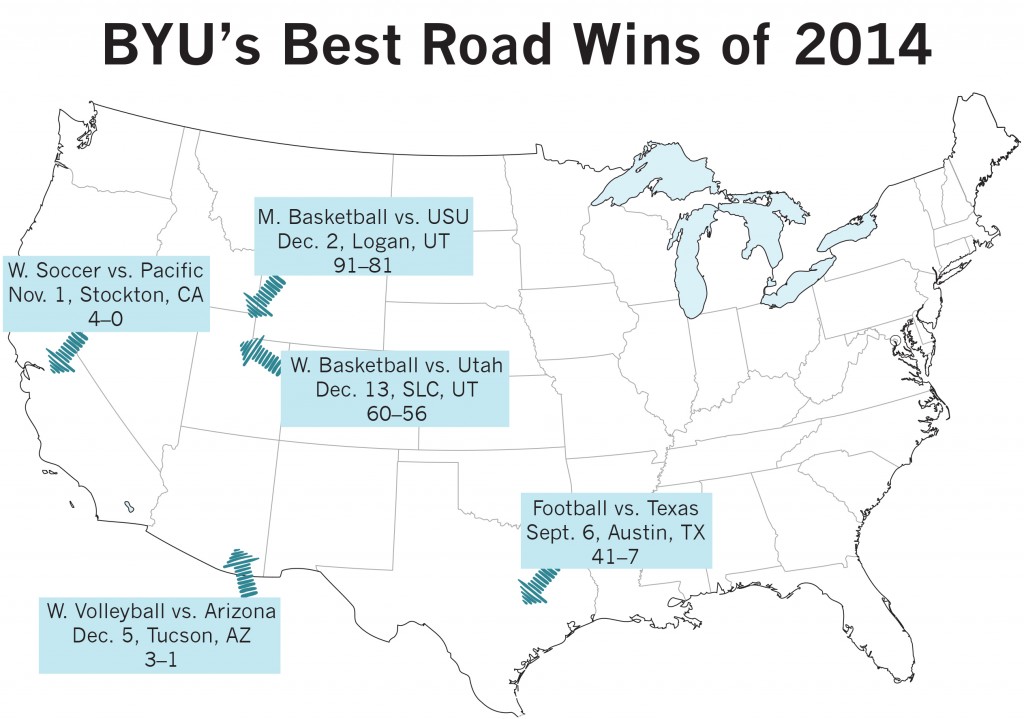 Senior linebacker Michael Alisa said BYU supporters who traveled across states to the game had a profound effect on him. “That Middle Tennessee State game happened right after a four-game losing streak, so BYU was not doing well at all, and they all showed up to support us,” he said. “So that was a surge of passion to go and play really hard. It showed us some love that we had been craving over the previous couple weeks.”

Cougar fans showed their team love at football games all over the country last fall, from Texas — where BYU cruised to an early 41–7 win — to California and even Connecticut.

Alisa said the loyal and consistent showing of BYU fans outside of Utah helped him realize the scope of BYU’s influence. “I remember realizing that, OK, we’re playing for more than just this game and for ourselves; we’re playing for Cougar Nation.”

The fans of Cougar Nation are so consistent and widespread that alumni tailgate parties attract droves of them. Roy Brinkerhoff, BYU Alumni assistant director of chapters and grants, said these tailgate parties usually have more than 300 fans in attendance.

“This year our crowds have ranged from 150 to 2,500,” he said in an email. “Generally, I think BYU’s alumni and Cougar fans simply want to feel connected to the school, the team and each other.”

BYU fans are organized in their efforts to support the traveling Cougars. According to alumni.byu.edu, there are 100 BYU Alumni Association chapters in more than 30 states throughout the country.

Sometimes BYU draws more fans to away games than the home team opponent does, and Alisa said they’re high-caliber fans too.

“I’ve been at a few games where BYU actually had more fans than the home team,” he said. “(Even at) games where there’s a lot of home team support, there would still be a huge sea of BYU blue. And they’re loud and extremely supportive.”

And it’s not just football, either. The women’s soccer, women’s volleyball and women’s basketball teams all routinely have more fans than their opponents — on the opponents’ home turf.

“We probably have more crowd than the opposite team,” freshman volleyball player Jaiden Achermann said. “It’s good to know that we have lots of support wherever we go.”

Niki Fernandes, a senior forward on the soccer team, transferred from San Diego State after her freshman year. She described the stark difference between the Aztec and Cougar away fans.

“At San Diego State, pretty much the only fans we had at away games were a couple of the parents that would travel,” she said. “BYU had more fans at San Diego’s home game when I was there than we did. It was crazy. . . That’s what’s so cool about this program, that we have so many fans all around, so it’s really fun.”

“We get a good amount of fans coming to our home games,” Bailey said. “But (at) away games sometimes we have more fans than the other schools do.”

BYU alumni and supporters from all over the country travel long distances to cheer on all of BYU’s teams as they compete. Fans seem grateful for the opportunity, but the athletes are also grateful for the fans.

“It is just amazing,” Fernandes said. “Everywhere we go we have a fan section. It’s so cool. … Having our fans there being loud is so great, and it definitely helps our team and the energy of our team. I know that sounds silly, but it really is so true.”

Bailey agreed that BYU fans at away games contribute to a friendlier environment for the team.

“It’s nice,” she said. “Especially when we’re away. It’s hard to play in other people’s territory, but when we have fans that come out and support us it’s awesome.”

Alisa has been giving high-fives to kids and posing for pictures with fans after games for a long time now.

“There’s no school like BYU with our fan base that after a four-game losing streak can have more BYU fans at a game than the home team,” he said. “We’re already highly motivated — it’s not like our only motivation comes from the crowd — but it definitely helps. So when you’re tired or feeling down, you hear the crowd start going wild, and it gets you going.”

The world is BYU’s campus, and for Cougar athletes, playing facilities around the country become temporary homes, thanks to the national fan base that’s always there to support them.