Mike Schneider transformed his hobby into a thriving company now selling skis in more than 30 countries, and he did it with grit, determination and the aid of his wife.

After Schneider lost his job in 2001, he and his wife decided to take a road trip to clear their minds and plan their next step. After touring through the Pacific Northwest, Canada and Montana, the two decided to open up a skateboard boutique store in Salt Lake City.

At heart they were skiers, but they sold snowboards and skateboards because they couldn’t find a ski that rang true to them. Since they weren’t able to find what they were looking for, the two decided to create the ski they wanted.

“Surface was just a concept we thought we could do,” Schneider said. “And once we decided that it was going to be snow skis, we thought, what is a big mountain that hasn’t been skied yet? It’s a white canvas; it’s a blank surface. Oh, it’s Surface. The brand is a blank canvas to create a brand, and it still holds true today. We can send a message that we want to send.”

Blake Nyman, one of the first to receive the new Surface skis, was a respected skier with various sponsors at the time Schneider created Surface. He recalls Schneider reaching out to him and offering him a pair of skis to try out.

“I went to Mt. Hood to give it some thought as I contemplated who to sign with next,” Nyman said. “There was something about Surface and Mike that connected. Surface has a different feeling, and I admire that. It made the decision pretty easy.”

Since Surface skis have only been manufactured for the past 10 years, the skis were not the highest quality. But gradually, as business has grown, Schneider has been able to increase the quality of Surface skis.

“Looking at their product lineup this year, they have some pretty sweet skis, and they are getting better,” said Joe Dorius, a skier of 15 years. “I own a pair, and they are a few years old, but they still work, and I haven’t had any issues with them … for the most part I believe that they make a good product. Guaranteeing a high-quality product from the start is hard now, but further down the road these guys will make some great skis.”

Now Surface skis can be purchased in South America, Europe, Japan and America. Schneider has since developed another brand, Causwell, and acquired Joystick, another ski company.

In 2008 Schneider visited a friend who owned Joystick, Anthony Boronowski. The two talked about difficulties they both faced from starting and maintaining a ski company and what to do. After these discussions, Boronowski approached Schneider with the proposition to purchase Joystick.

“We didn’t want to see such a good brand go down the drain, so we purchased the company and kind of became a foster home for Joystick,” Schneider said.

Surface offers skis with an early-rise tip, allowing the skier to float and work less when making turns. Surface’s Outside ski made a splash into the market with its design because of the radical shape.

“People thought it was broken when they first saw it,” Schneider said.

Forbes Magazine states that the number-one reason businesses fail is because they aren’t connected with customers in a deep dialogue. For Surface, connecting with customers is considered to be one of the company’s strengths. Surface sells directly to the buyer, cutting the middle man out of the picture. As large corporations struggle to figure out what to do next in their marketing schemes, Surface has collaborated with other startups, creating more niche products for customers.

“From the get-go it’s been a people’s brand,” Nyman said. “It’s relatable, and Schneider has a creative, personal tone with the brand. He has the ability to build relationships with others. The feeling at Surface is genuine; it’s not just a marketing outlet.”

Facing hardships was a constant for Schneider as he developed Surface. Sticking true to one of his mottos — “live the life you want” — he continued moving forward, never giving up.

“There were probably hundreds of times when I thought of throwing in the towel and quitting,” he said. “But back in 2006, we had a private equity partner step up and help out financially, which really saved us. It started out kind of like a hobby with my wife and I. We were making skis and getting popular, but we couldn’t expand because we had already maxed out our credit lines at the bank, and they weren’t going to loan us more. We had the opportunity to sell Surface a few times but declined.”

Schneider is reaping the fruits of his persistence now as Surface continues to develop and grow. 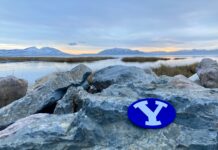