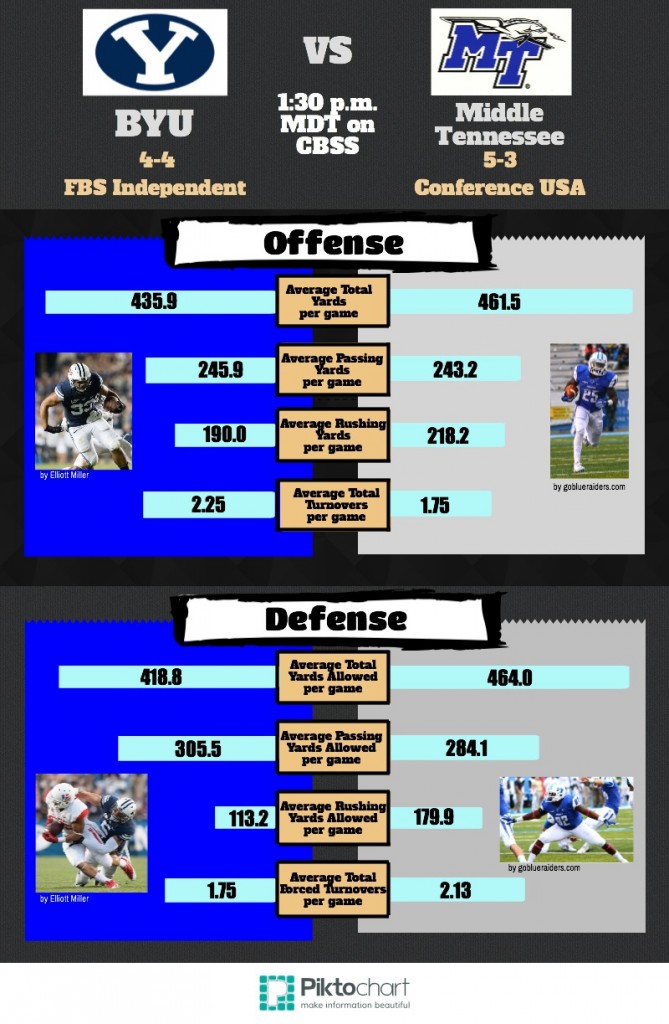 BYU football heads to Middle Tennessee in hopes of shaking off a four-game losing streak.

The two teams faced off for the first time last season, BYU taking the victory. Saturday’s game will be difficult for BYU, with its record being 4-4, where Middle Tennessee, however, has won its last seven games at home.

Last week, the Cougars lost to Boise State in a match that was tough from the beginning. The Broncos had five touchdowns, two field goals and 41 points before the second half even began. The BYU defense was able to slow them down, but BYU ultimately lost 55-30, Boise State.

“We’re all competitors, coaches and players,” Bronco Mendenhall said in a press conference on Monday. “Each person goes through kind of their own grieving process, so to speak. Coaches have to do it fast. Players are normally more resilient. I don’t sense any splintering, wavering, segmenting — I sense resolve, and how fast can we play again is what I’m sensing.”

Despite the scoreboard, Christian Stewart threw for 259 total yards, his second highest career achievement. He finished the night with a 61 percent passing rate and one personal rushing touchdown.

The defense, on the other hand, could not pull out the stop. It allowed the Broncos 637 total yards by the end of the night, with Mendenhall calling the defensive plays.

Looking ahead to Middle Tennessee, Mendenhall does not intend to have the same strategy.

“No, what I plan to do is just support all our coaches the best way that I can,” Mendenhall said. “And so one of the next steps for our program to really grow and develop is to keep continuing and increasing the capacity of the coaches on the staff.”

Middle Tennessee came off a win last week against conference competitors University of Alabama Birmingham. After trailing in the third quarter, 22-21, running back Reggie Whatley ran for a 67-yard touchdown that pulled the Blue Raiders ahead.

Quarterback Austin Grammer only completed 32 percent of his passes, throwing a total of 141 yards. However, he accomplished two passing touchdowns, and the game ended with Middle Tennessee on top, 34-22.

After the win, Rick Stockstill, the Blue Raiders’ head coach, is not taking BYU lightly, regardless of BYU’s losing streak.

“We got our work cut out for us,” Stockstill said in a press conference Monday. “This week we’re preparing for (BYU). So, looking forward to the challenge. When you play a team like this, you’ve got to be really good in the kicking game, and, I say it all the time, you can’t turn the ball over. We can’t give the short field. So, we got to make sure we’re very protective of the football and play well in the kicking game.”

Mendenhall glances to Middle Tennessee and sees a team that is very similar to last year.

“Similar in terms of scheme and personnel, a lot of the same guys,” Mendenhall said. “Certainly capable. … Our focus right now is really just on improving our team, and I’ve got a lot of work to do for the guys to enjoy playing the game, to feel anxious to just go out and perform well and to enjoy the whole experience. That’s the biggest challenge right now.”

BYU will play Middle Tennessee on Saturday, Nov. 1, at 1:30 p.m. (MDT). If BYU hopes to continue to a bowl game come post-season, they need to start winning games. The Cougars are hoping Middle Tennessee may provide them with one.