The first set started with a lengthy rally and a kill by BYU’s junior Hannah Robison. Both teams tied up at 6-6, but Utah took over with a 5-0 run. Momentum stayed in their favor bringing them to 21-14. BYU fought back with sophomore Alexa Gary scoring three straight kills, but Utah still took the set 25-18. 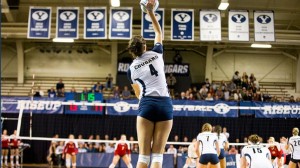 Utah started the third set with multiple runs and a clear lead until BYU came back 19-19. with a 9-1 run and a few kills BYU took the third set 25-22.

BYU was led by junior Jennifer Hamson with 15 kills and Gray with 13.  Haddock also contributed 10 kills.

BYU travel next week to take on Colorado State April 12 at 10 a.m. MDT.