The game between BYU and Dallas Baptist was tied 3-3 until the sixth inning, and it was an uphill battle from there. The Cougars failed to make a comeback after Nash Knight hit a home run, pushing the Patriots ahead to later take the win, 8-3.

“It’s like we are swimming upstream,” BYU coach Mike Littlewood said. “We have to work out of it. We really competed today. (Brandon) Kinser gave us a quality start.”

Kinser was put in abruptly to start the game after predetermined starter Hayden Rogers suffered a concussion when a batted ball hit him during the pre-game warmup. Though Kinser helped the Cougars along, in the end it wasn’t enough. 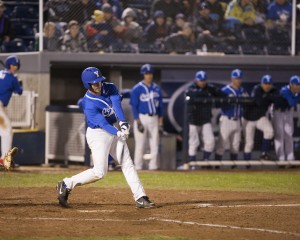 At the end of the second inning, Bronson Larsen threw out Patriot Trevin Sonnier as he tried to steal second. And at the end of the third, Kinser got a fly-out to Eric Urry despite giving up a two-out double at the start of that inning.

The Patriots led 1-0 until the fifth, when Brennon Lund and Hayden Nielsen hit singles. Nielsen scored a run when infielder Parker Starr sent a two-out single to right field. Eric Urry followed Starr’s lead, and bunted the ball towards third base, giving Lund time to score the second run, putting the Cougars ahead 2-1.

CJ Latham, who stole second base in the sixth inning, scored BYU’s third and last run of the night when Trace Hansen hit a pop-fly.

DBU came back at the bottom of the sixth, scoring two runs on three singles. Then came Knight’s home run, which let the Patriots pull ahead of the Cougars once and for all.

The Cougars, now 7-11, will return to Provo this week, to begin a three-night series of home games. Thursday night they will face San Diego (11-4) in the first league game of the season. The game at Larry H. Miller Field will begin at 6 p.m.