The Cougars, down by as many as 14 in the first half, fought back in the second half to beat the Gaels, 60-57, stealing a huge road win to retain second place in the WCC.

BYU (18-10, 10-5) shot a dismal 1-for-6 from the free throw line in the first half but didn’t cave under pressure, sinking four straight from the charity stripe with under a minute to go to beat the Gaels for their first-ever victory on the Gaels’ home floor in Moraga, Calif., Saturday night. 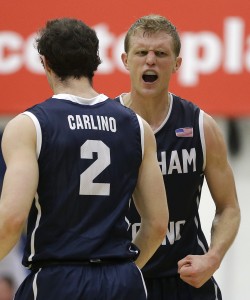 Nearly out of it at the break, the Cougars amped themselves up after taking the season series against the Gaels.

“He (Rose) was pumped; everyone was,” said Tyler Haws of his team’s reaction to the win. “We were jumping up and down and going crazy.”

Matt Carlino, essentially absent in the first half, hit a floater in the paint to tie the game up at 53 with 3:46 to go, the first tie since the score was 2-2. A miss by the Gaels on the other end led to a tip in by Nate Austin off a missed Carlino three to give the Cougars a 55-53 lead for the first time since 2-0, a momentum swing in the Cougars’ favor.

“I don’t know if this was our best game,” Rose said. “But the effort was consistent, guys were making plays and every guy that went into the game contributed to the win.”

From there the Gaels (19-8, 9-5) had ample opportunity to take the lead but fell short after two Kerry Carter turnovers that spelled doom for a Saint Mary’s team that was up for all but the last three minutes, leading to the Cougars’ three-point win.

Brad Waldow led the way for the Gaels, scoring 17 points on 6-8 from the field, bullying his way to the rim for easy points in the paint, 10 of which came from that area. Stephen Holt added 13 points off 4-9 from the field, including three huge three pointers that stretched the Gaels’ lead each time the Cougars fought back.

The Cougars bounced back in the second half, chipping away at the Gaels’ 10-point halftime lead slowly, going on an 11-3 run in the first ten minutes capped off by an Austin layup and a Mika free throw, down 44-41 with 12:19 to go.

Haws split 18 points between both halves, shooting 8-15 from the field and dishing four assists. He drew a foul from Waldow and hit two from the line to bring the Cougars within three with 7:46 remaining.

“It was just crazy; it feels so good to win here; I don’t think BYU’s ever won here, ever,” Haws said. “Anytime you’re on the road it feels like everything’s against you, and the only place to turn is inward — to your team, to your coaches. We kept telling each other it’s going to turn our way, and it did.”

Sixteen of the Gaels’ first 24 points came in the paint, the final two coming off a blind assist from Waldow, who threw the ball behind his head and connected with Jordan Giusti for an easy layup, taking the Gaels’ lead to 23-11 with 8:11 to go in the first half. The Gaels finished the half with 22 points in the paint to BYU’s 14.

The Cougars, much like in their loss to Pacific on Thursday, fell into foul trouble early; Eric Mika ended the half with three fouls, and Austin and Luke Worthington had two apiece. Early bench time for BYU’s bigs meant more space for Waldow and Matt Hodgson to maneuver in the lane.

Kyle Collinsworth added 14 points off 7-14 from the field, six rebounds and three assists, but took a nasty fall while jumping for a rebound against Stephen Holt, falling awkwardly on his left leg. He went to the locker room to be evaluated, eventually returning with 2:44 left before halftime.

Haws got hot late, totaling eight points for the first half off 4-8 from the field, bringing the Cougars within six of the Gaels with just over five minutes left before the break.

With the win, the Cougars head back home to face league-leading Gonzaga (23-4, 13-1) in a contest that would almost assuredly slate them into the NCAA Tournament with a win and give them the second seed as they prepare for the WCC Tournament in early March.

“Tonight was all about our guys,” Rose said. “These guys just needed to put everything aside and play a game — enjoy the game and battle and compete and get the win. It’s really good to be able to go home with our guys really together and looking forward to the last couple weeks.”