BYU football’s third-ranked defense took a hit when linebacker Ziggy Ansah went fifth in the NFL draft to the Detroit Lions. Ansah helped wreak havoc on opposing offenses the second half of last season, and many are hoping Bronson Kaufusi to do the same this season. 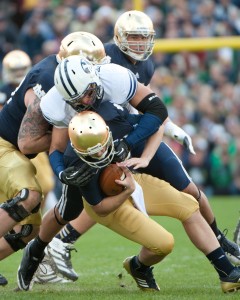 Ansah had 62 tackles, 13 tackles for loss and 4.5 sacks last season. He often played on the opposite side of linebacker Kyle Van Noy, preventing teams from keying in on the side opposite of Van Noy. Van Noy remains, but with Ansah gone, a hole in the defense needs to be filled.

Starting linebacker Spencer Hadley thinks the Cougars have the man to keep them as a top-five defense and help them have a year even better than last.

“Have you guys seen Bronson Kaufusi?” Hadley said. “He’s every bit as big; in fact I think he’s even taller than Ziggy. The kid has a motor that doesn’t stop. I think he could be, in the future, every bit as good as Ziggy was, and I think he’s going to answer a lot of your questions this year as far as replacing that position.”

Ansah is a physical player in his own right. At 6’7” and weighing 280 pounds, Ansah punishes offensive players, all while running like a 200-pound safety. Kaufusi stands at 6’7″ and weighs 270 pounds; although he may not have Ansah’s speed, his size, quickness and agility is still remarkable.

“I don’t think he’s much of an unknown, but I think it’s going to catch a lot of people by surprise how well Bronson Kaufusi’s going to play and the type of impact he’s going to have on the field,” Hadley said.

It’s only July, and Kaufusi is already feeling the pressure. Compared to the stress he felt last year, coming straight off his mission, this season is proving to be a much less daunting experience.

“Last year, I was going up against guys who had been lifting and preparing for a year or more … and I had just had one week. It’s different,” Bronson Kaufusi said. “Their muscles are just more dense, stronger and more used to it. So this year, being able to train for the off-season is great.”

Bronson Kaufusi also suited up for the men’s basketball team last year, playing in the forward position. Many feared playing two sports would set him back on the football field or that he would sustain an injury. Kaufusi’s teammates, however, feel basketball helped him to be a more well-rounded football player.

“I think that his conditioning level has improved. I think footwork, absolutely. I’m a believer in multiple sports,” Hadley said. “I think when you train in the weight room, the idea is to come up with different lifts to work the same muscle so that your body doesn’t get into a routine, kind of keeps your muscles guessing, and I think multiple sports does that.”

As the Cougars’ season opener on Aug. 31 against Virginia approaches, Kaufusi will continue to train and prepare himself for the season ahead.

“I could just train all day if I could,” Bronson Kaufusi said. “I love it. I just hate being bored with nothing to do.”