The BYU men’s soccer team continues its home stand this weekend against the Real Colorado Foxes.

BYU dropped a match against the Foxes in Colorado earlier this season, losing 3–0. The Cougars have struggled to find the back of the net early on this season, but the team is hopeful it can turn this around.

The Cougars are currently in a three-game losing slump but know they have what it takes to pull out a victory. Though BYU has had many opportunities in all the games it has played to put points on the board, Watkins knows that the young squad has had its challenges on offense.

“We need to be better in our attack and score more often,” he said. 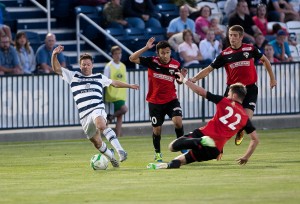 BYU will have the opportunity to do just that on Saturday night. Tickets are available at the front gate and are being offered as a two-for-one deal before kickoff. Pass of all Passes holders get into the game for free. Students pay $5, and adults pay $6. Kickoff is at 7:30 p.m. on Saturday, June 8.

The Cougars have one more home game on June 14 against the Southern CA Seahorses before going on the road again.