A tempest over a teapot boiled over this week regarding a JC Penney billboard advertisement featuring what some California commuters say is a kettle that resembles Hitler.

The billboard is visible along the Interstate 405 near Culver City.

Hashtags and posts featuring the kettle billboard exploded in the Twittersphere and on Facebook this week. Tracking the source of the brouhaha, most discussion seems to have originated from this Reddit forum.

In an attempt to quell the controversy, the department store giant has removed the offending ads and JC Penney posted a tweet explaining that the likeness was “definitely unintended.”

In a side note, the department store chain reported that they are sold out of the kettle.

A 31-year old woman slapped a Sacramento County deputy for the express purpose of being arrested and taken to jail so that she would be forced to give up cigarette smoking.

Deputy Matt Campoy was leaving his shift at the county jail when he was surprised with the slap across his face, reported the Sacramento CBS affiliate, channel 13. 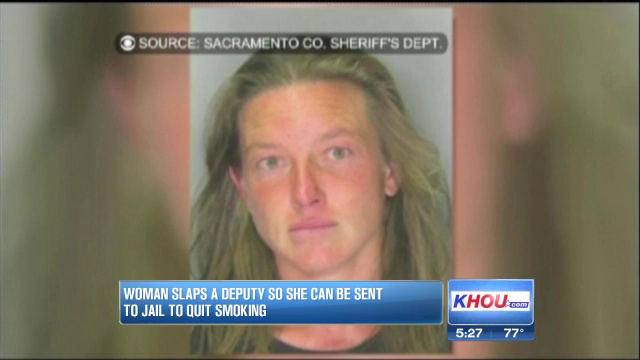 “All of a sudden, she stepped into me and slapped me in the face,” Campoy told Channel 13.

The woman sat in front of the jail for hours before seeing the deputy and giving him the slap. Etta Lopez was then arrested on the spot.

“She told us she needed to quit smoking,” Campoy said. “She explained it with great detail as to why.”

A neighbor of the arrested woman said he used to smoke with Lopez and that she does smoke a lot. However, he believes there are easier ways to stop smoking than “hitting a cop.”

“That’s not the way I want to quit,” Roger Spearman told Channel 13 between coughs.

Lopez was sentenced to 63 days in the Sacramento County Jail for assaulting an officer and given three years probation. The jail is, indeed, smoke-free.

The U.S. Navy is trying to figure out how a 130-year-old brass torpedo got to the bottom of the Pacific off the coast of San Diego near California’s historic Hotel Del Coronado.

However it got there, the rare weapon find has to be credited to two trained dolphins. The surprise discovery was so unexpected that the trainers working with the dolphins didn’t believe the signals at first.

The Navy-trained marine mammals were taught to search and discover under-water mines and mark their locations by the Space and Navy Warfare Systems Center Pacific (SSC Pacific). The dolphins were out working and following instructions from their human trainers who had placed mine-shaped objects in the sea as part of a learning exercise.

“It’s all part of training to show the dolphins what they’re going to be exposed to when they’re on real-world missions,” SSC Pacific spokesman Jim Fallin told NBC News.

A dolphin that was sent to dive and look for the training objects came back up and gave a signal that the trainers didn’t expect and which they initially disregarded as a mis-signal.

“It had found something where we knew something shouldn’t be,” Fallin said to NBC.

Another dolphin was sent down. This one also gave the same signal to trainers. That’s when the group began taking the dolphins seriously.

A bonafide piece of naval history was discovered by the divers sent down to see what the dolphins found.

“It was apparent in the first 15 minutes that this was something that was significant and really old,” Christian Harris, operations supervisor for the SSC Pacific Biosciences Division, said in a news release.

What the dolphins found was the tail section from one of the first self-propelled torpedoes developed and used by the U.S. Navy: the Howell Torpedo.

“Dolphins remain the pre-eminent capability for the Navy in counter-mine identification,” Fallin told NBC. “There’s no technology that the Navy has today that replicates the dolphins’ natural ability to identify mines.”