BYU gymnastics takes on in-state rival Utah State on Monday, March 4 in the shortest practice week of the season.

The gymnastics athletes are ready to take on Utah State after landing their fourth score above a 195 this season. Last meet, BYU scored second in a meet against North Carolina State and University of Utah, with a 195.500. Coach Brad Cattermole believes the BYU gymnasts have the ability to score above a 195 in the remaining meets of the season. 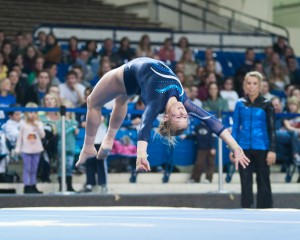 BYU will need to do just that in this meet against Utah State. BYU was able to top the Utah State Aggies score of 194.075–189.425 early in the 2013 season. Both BYU and USU have been able to improve individual and overall scores since the January meet, adding to the excitement of Monday’s rematch. USU’s 189 against BYU was their lowest score of the 2013 season. USU has improved to score 193.400 in their last meet against Sacramento State, positioning this team to score well against BYU.

The BYU Cougars will compete at Utah State in Logan, UT. BYU fans can access scores and live streaming video at www.UtahStateAggies.com starting at 7 p.m. MST.