The Cougars recalled what Gaels’ guard Matthew Dellavedova did to them in the Marriott Center six weeks ago and wanted to take back a game what should’ve been theirs.

“Guys were encouraging each other in the huddle, supporting each other (and) I really believe the feeling among the guys was different tonight,” BYU coach Dave Rose said.

Intensity was high from the tip-off when Brock Zylstra was charged with a technical, within a minute of the game, after a hard foul on Gaels’ foward Mitchell Young. BYU shot 59 percent in the first half but only held a four-point lead due to its seven turnovers. 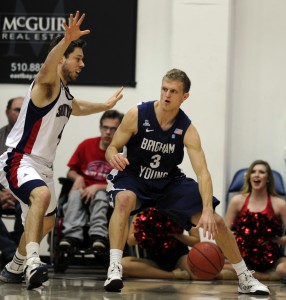 Every time BYU was within reach of grabbing the lead, St. Mary’s hit a big shot and slowly crushed BYU’s hopes of coming out with a victory. Dellavedova finished with 20 points, four rebounds and four assists.

“When it came down to making big plays, they made them,” Rose said. “Dellavedova is an amazing player and he leads that team. We thought we had a good game plan coming in and could keep it close, and we really were so close. A couple defensive lapses, though, and it’s gone. We lost it.”

Matt Carlino, who hit a bump in the road, had a chance to tie it at 59 apiece with 1:20 left to go, but missed both free throws and finished the game with two points and two assists.

Despite a hard-fought game, BYU’s 14 turnovers and inability to crash the boards led to too many second-chance points for the Gaels. Just like their previous meeting, BYU allowed SMC to grab 12 offensive rebounds to its three and was out-rebounded 32 to 22.

Brandon Davies carried his team all night with game-highs 25 points, eight rebounds and four assists but couldn’t get enough from his teammates on a night he needed it most.

“Tyler was getting a lot of attention so, to try and weaken the pressure, we had to get the ball inside and try to find another way to score,” Davies said. “There are a couple plays tonight I wish I could get back and some I wish I had finished on. It was a tough game.”

Davies said the “little mistakes” hurt the team, especially when BYU couldn’t execute down the stretch.

Tyler Haws’ feat was spoiled on the night he became the second player in BYU history to score 1,000 points in his sophomore season. Haws, who leads the WCC in scoring, also had an off night scoring only 12 points to go along with six rebounds.

Rose still expects his players to compete with the games left on their schedule.

“It’s a lot easier to grow as a team when you win, not after a loss,” Rose said. “And it’s a shame because I thought the guys played tough tonight. We just need to spend this next week getting ready for the tournament, we still have a lot of games to play and the guys need to be ready.”

The schedule doesn’t get any easier as BYU takes on No. 3 Gonzaga at the Marriott Center on Thursday night at 9 p.m MST.