Matt Carlino and Brandon Davies led the way as BYU defeated the Portland Pilots on the road 85–67. BYU now leads the series record 8–0.

“I thought it was a great effort tonight by our guys – we got off to a great start,” said BYU head coach, Dave Rose. “That first half we were really dialed in, everyone was playing their part.”

Carlino led the team with arguably his best game of the season with 24 points, shooting 10 of 17 from the field, six assists and four steals. 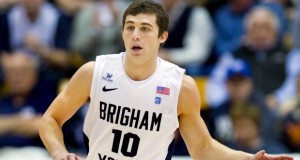 “We pushed the ball better than we have in a while,” Carlino said. “I think that was one of the biggest things that we did to win.”

“Matt really controlled the game right from the start and that’s what we need from our point guard,” Rose said.

Davies came out with energy and finished the first half with 11 points, six rebounds and two steals. He had a small scare, limping to the locker room in the second half, but went back out to finish the game with a total of 20 points and 11 rebounds.

“Brandon was able to make big plays and run the offense,” Rose said.

Despite coming off a one-point game against the Gonzaga loss, Tyler Haws bounced back and finished with 19 points and three steals.

The Pilots shot 46.9 percent and missed 13 free throws while the Cougars shot 51.7 percent from the field. BYU was very active on the defensive end and made 12 steals to force Portland to a total of 17 turnovers that led to 24 points for BYU.

Things got a little heated at the 14-minute mark when both teams hit the floor to grab a loose ball and Portland’s guard, Tanner Riley, jumped onto Brock Zylstra. Riley lost his composure, grabbed Zylstra around the neck and threw him to the ground, which ended in an ejection for Riley. Haws made both technical free throws to put BYU up 59–40.

With a win over Portland, BYU is now 16–6 overall and 6–2 in the WCC while Portland stands on a 8–14 overall record and a 1–6 record in the conference.

BYU will stay on the road for one more game against Pepperdine on Wednesday night at 7:00 p.m. PST at the Firestone Fieldhouse before coming back home to the Marriott Center. The game will be broadcast live on Root Sports and KSL radio.