Recent shootings have not only motivated President Barack Obama to ask for changes on gun control but children throughout the nation are asking for changes as well.

Julia Stokes, an 11-year-old from D.C., wrote in a letter to President Obama, “I’m not scared for my safety, I’m scared for others. I have four brothers and sisters, and I know I would not be able to bear the thought of losing any of them. I know that laws have to be passed by Congress, but I beg you to try very hard.” 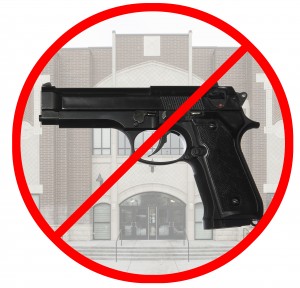 [/media-credit]Obama responded to her letter at the press conference on Wednesday by saying, “Julia, I will try very hard.”

Julia and three other elementary school children sat near Obama as he announced his plans to reduce gun violence Jan.16.

The National Rifle Association suggests that the most effective way to protect children from future shootings is by placing armed guards at the entrance of schools.

Wayne LaPierre, executive director for NRA, made this suggestion at a press conference.

LaPierre suggested the Sandy Hook tragedy, where 26 women and children were shot and killed, could have been avoided if there was an armed guard on duty at the entrance of the school.

“We can immediately make America’s schools safer, relying on the brave men and women in America’s police forces,” LaPierre said.

Others want to keep the NRA out of schools. “Qualified professionals in public safety are better equipped to make plans to protect our children,” said Maryanne Martindale, executive director of Alliance for a Better Utah.

“Many of our state legislators are more loyal to their guns and the NRA than their own constituents, preventing them from dispassionately approaching the problem of gun violence,” Martindale said.

The Sandy Hook shooting prompted a Utah city councilman to propose that the town’s elementary school teachers take a concealed-carry permit course at the city’s expense. Neil Sorenson, city councilman of Spring City, also proposed that every household own a gun.

“We don’t like big government, so we’re not going to force anyone,” Sorenson said.

Awareness of gun violence and control was shown at Sandy’s Jan. 6 Rocky Mountain Gun Show where attendance increased visibly and the recent shootings may be the cause.

Pam Haroni, owner of Rocky Mountain Gun Show, described it as “the biggest show we’ve ever had in Salt Lake.”

“We usually have four shows a year in Salt Lake,” Haroni said. “There were a lot more people at this one than the last one we had in August. There were more people outside waiting in line to get in. It was just a lot more crowded.”

“They worry about the protection of their own children and their families and about the changes that may happen. That was the general feeling at the show,” Haroni said.

Others still believe implementing new policies is the way to reduce gun violence in America. Martindale mentioned policy suggestions to combat gun violence on Better Utah’s Jan. 8th Beat broadcast including reinstating the 1000-foot ban on guns near schools and requiring an insurance policy to own a gun.

Isaac Holyoak, communications director of Alliance for a Better Utah, believes the steps we take to protect people from mass shooting tragedies “shouldn’t be escalating the violence” because mass shootings aren’t the biggest problem.

“People are referring to guns more and more frequently. This isn’t the Wild West anymore; we want to be able to walk out in public without a gun,” Holyoak said.

Holyoak said it is 22 times more likely to be killed by a gun if there is one in your house. This includes accidents, suicide and violence.

“You are more likely to kill a family member than an intruder,” Holyoak said. He believes having more guns around will not decrease the amount of gun deaths.

“The NRA’s job is to represent the money interest, not the children’s interest,” Holyoak said. He echoes Martindale’s request to “keep the NRA out of our schools.”