BYU used its defense to outscore the Pepperdine Waves 46-16 in the second half to remain undefeated at home and came out with a 76-51 victory Thursday night.

Tyler Haws scored a game-high 24 points, including a 7-0 run of his own to cut Pepperdine’s lead to four between the 4:33 and 2:51 mark in the first half. Brandon Davies scored 19 points and grabbed 9 rebounds while Matt Carlino contributed 13 points, going 3 for 4 from the 3-point line. 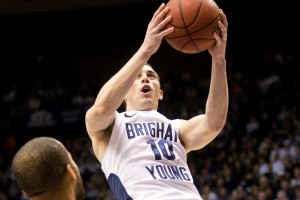 Pepperdine came into the Marriott Center leading the West Coast Conference in field goal percentage defense at 39.2% and proved just that in the first half as they held the Cougars to 28.1% shooting.

“Pepperdine had a great game plan coming into the game. They were really physical around the basket, made it difficult to score at the rim and they contested shots,” BYU head coach Dave Rose said.

Although the Waves shot 50% from the field, led by sophomore guard, Jordan Baker, who scored 20 points in the first half, the Cougars were able to lock down on defense and hold him scoreless in the second half. BYU doubled on Baker when he caught the ball and challenged other players to make the plays the last 20 minutes of the game.

“We were giving [Baker] easy buckets,” Carlino said. “We didn’t do a good job defensively to start off the game with him, [but stopping him] was a team effort.”

After going scoreless for nearly three minutes to start the second half, BYU turned things around. Carlino gave BYU its first second-half lead with a 3-pointer at the 14:14 mark, making the score 40-39, followed by a steal and assist to Craig Cusick for a layup, which extended the lead to 42-39. The Marriott Center erupted and the Cougars never looked back again.

“When we get stops, that allows us to get out and run, which is what we like to do,” Cusick said. “We got some good stops in the second half which allowed us to space the floor and get open shots.”

The past two games, against San Francisco and Pepperdine, BYU went into halftime down by nine and five points, respectively. While Rose credits USF’s offensive surge and Pepperdine’s great defense, BYU knows it is important to get off to better starts.

“We need to come out better in the first half,” Cusick said. “We’re going to fix that so we can have a solid 40 minutes of the same effort that we gave in the second half tonight.”

“[Tonight was a] big win, and I look forward to our game on Saturday,” Rose said.

BYU hits the road to Santa Clara to play its next game on Saturday at 2:30 p.m. MST.