In the women’s soccer NCAA tournament, a goalie literally has the game in her hands. Her ability to block a penalty kick can make or break a team’s post season. As the tournament goes on and the competition gets tougher, it becomes more and more likely that what the game will come down to is a penalty kick shoot out, and the ability of the Cougars’ goalie, Erica Owens, to protect the goal. 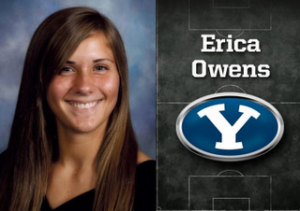 In the regular season, ties are allowed. However, in the tournament it’s single elimination, and there has to be a winner of every game. The changed rules for the post season are: If it’s tied at the end of regulation, there are two fifteen-minute overtime periods. If the game is still tied at the end of those, there’s a penalty kick shootout. Coaches pick whichever five players they want to take a shot on the goal—the best out of five win. If it comes down to this, the pressure is on. But don’t expect to see any nerves from goal keeper Erica Owens. She enjoys the pressure. “I have a lot more fun when the pressure is increased, because I know the stakes are high and if we perform it’s gonna be another one of those games that I’ll always remember.”

Erica Owens has gone from hardly any minutes to hardly any breaks in the action. She only played 25 minutes her freshmen year, then redshirted the next season. The season after that, she sat out due to an injury. Up until this year, Owens had a lot more training, then game time experience, but head coach Jennifer Rockwood says that Owen’s hard work and practice has really paid off and she’s risen to the occasion. “She’s proven right from the beginning that she could handle the pressure, that she wanted the pressure, and she kinda feeds off it, so I think she’s doing a tremendous job.”

A potential PK shootout would come at the end of 120 minutes of play, but that doesn’t scare Erica Owens. She said that at the end of every game, she is wishing for more. If she gets her wish and two overtimes turn into a shootout, Coach Rockwood isn’t worried. She said, “If it comes down to having PKS, there’s no one I’d want more on goal than her.”

Marquette is a team that has scored a lot of goals this season, so it will be interesting to see if Owens can pitch her 12th shut-out of the season. If she brings her A-game then it’s definitely possible.