This was the first of three presidential debates, the topic being domestic policy. Both debaters showed their passion for their different plans, and both described the direction that America is heading in the time of an economic crisis.  Romney said he sees the national debt as more than just dollars.

“It is not an economic issue, it is a moral issue,” Romney said. “We don’t want to pass that debt on to the next generation; it just isn’t moral.” 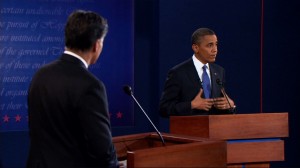 [/media-credit]Obama defended himself by stating that he was thrown into a debt crisis of more than one trillion dollars his first day of being president.

“It doesn’t matter where we have been, it matters where we are going,” said Obama.

Romney continued by explaining how he will close the economic deficit and fix the debt crisis. Romney stressed the importance of job creation and small businesses. He advocated for competition and people building their own dreams.

Romney also said that the fundamental role of the federal government is to keep the American people safe, secondly to allow them to succeed. Obama was confident that the country is headed for recovery and that it is only a matter of time before improvements are made.

“Four years ago we were going through a crisis, and my future vision for America remains undiminished,” Obama said. He continued by saying that he wants to channel American people’s dreams so that “they can succeed and so that it is fair.”

According to both candidates, the direction that America takes will ultimately be in the hands of voters.