Your little brother probably doesn’t dream about being the next Riley Stephenson. 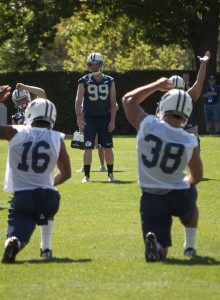 Stephenson was magnificent last season, but when asked about his achievements his response was simple: “Why not try to go for a little bit more?”He may not grace the cover of magazines, and may not be recognized on campus, but this senior punter is absolutely essential to his team’s success.

Stephenson’s impressive resume reads like a novel. Just last season, he had 1,985 yards on 47 punts for an average of 42.2 yards per punt.

Unlike many punters who simply boom punts into the end-zone to preserve a high punt average, Stephenson focuses on pinning opposing teams near their goal-line. Last season, he placed 20 punts inside of the opponents 20 yard line.

This doesn’t mean Stephenson has a weak leg. When the situation is right he is known to send booming punts down field. Stephenson had 15 punts over 50 yards last season, and probably would have had more if the Cougar offe

nse hadn’t been operating so efficiently throughout the last half of the season.

In last year’s bowl victory over Tulsa, Stephenson earned All-Bowl Team honors with eight punts for 335 yards, an average of 41.9 yards, including seven inside the 20 and two over 50 yards.

However, Stephenson was quick to give the credit from his stellar bowl game to his teammates.

“Our punt team was awesome. To have seven of the eight punts in the 20-yard line is huge,” Stephenson said. “It wasn’t all me. It was all the punt team. Special teams played a big role in that game, field-position-wise, because we pinned Tulsa deep every time. I felt it was huge for the team.”

Cougar head coach Bronco Mendenhall said he is sure Stephenson will pick up where he left off last season.

“I would love him to finish just like he did in the Armed Forces Bowl,” Mendenhall said.  “We have great confidence in him and we are using that as his point of reference and what we think he can do.”