BYU has had ownership or co-ownership of the WCC title in seven of the eight seasons that women’s soccer has been a member of the conference. They now stand as the lone representative of the WCC with Santa Clara losing out in the third round of the tournament. BYU women’s soccer head coach Jennifer Rockwood has captured a conference title in 16 of her 25 years as coach and has brought 20 of her 25 teams to the NCAA tournament.

BYU now sits at 21-0-1 on the season and remains the only undefeated NCAA Division I women’s soccer program in the country. These 21 wins place the 2019 squad in a tie for second place among all BYU teams for single-season wins, just one behind the 22 wins recorded by the 1996 women’s soccer team.

BYU has been firing on all cylinders this season with senior Elise Flake contributing 20 goals and counting, giving her a tie for fourth-most among all BYU goal-scorers and the most since 1998 when Shauna Rohbock tallied 24. Mikayla Colohan also sees her name in the BYU record books with 16 goals so far during the 2019 season, putting her in a 12th place tie with Michele Vasconcelos on the single-season goals record list.

BYU has scored 12 goals through the first three rounds of this year’s NCAA tournament while only allowing one, giving them a +11 goal differential. No. 1 ranked Stanford is the only team with a better goal differential than BYU through the first three rounds of the NCAA tournament with a +21. Fifteen of those goals came in Stanford’s 15-0 win over Prairie View A&M.

Stanford topped No. 18 Penn State 2-0 in its round of 16 game on Nov. 24 to advance to the Elite Eight. The two-goal differential tells a much different story than what actually occurred on the pitch as Stanford fired 35 shots towards Penn State’s goalkeeper Amanda Dennis, with 14 of those shots finding the target. Penn State wasn’t able to fire a shot near the Stanford goalkeeper until the 84th minute, but the Nittany Lions ended the game without a single shot on target.

BYU and Stanford will face off in the Elite Eight on Friday, Nov. 29, at 4 p.m. at Stanford’s Laird Q. Cagan Stadium as BYU looks to continue its historic season. 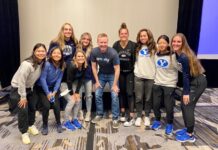