When a couple progresses toward engagement, a question typically crosses a man’s mind about how much buying a ring will cost.  Joseph Naylor answered this question by looking at his girlfriend’s Pinterest account to see what rings she had in mind.

Men have found uses for the popular website Pinterest despite the fact that, according to a study done by Modea, a digital advertising agency, 68.2 percent of the users are female.

Naylor, a senior from Overland Park, Kan., is one of the male users of Pinterest.  Though he said he hardly ever uses his account, he stumbled across his girlfriend’s ring board. He discovered the rings she had in mind were not too expensive.

“It’s kind of sneaky,” Naylor said. “Maybe I shouldn’t do that.” 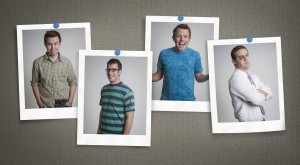 Tyler Murphey, a senior studying history, finds Pinterest to be a valuable tool in order to understand what women are interested in.

Murphey has used Pinterest for date ideas. He saw an idea of doing a Chinese-themed date on Pinterest and proceeded to take a girl on a date where they went shooting, launched a model rocket and ate Chinese food.  Murphey is now dating the girl he took on this Pinterest-inspired date.

“As long as you’re comfortable in your masculinity, I highly recommend getting a Pinterest account,” Murphey said. “It’s entertaining; it’s useful. There’s no reason not to.”

Joshua Dance, 26, majoring in information systems, uses Pinterest for architecture ideas. With dreams of building his own house one day, Dance has considered several ideas he found on Pinterest. He said some of his favorite ideas include putting triangle drawers into a corner cabinet as opposed to a lazy susan and installing electrical sockets that recede into the wall so furniture can be right against the wall.

“You have to pin manly things,” Dance said. “Anything related to fire, cooking meat or cars would be a good thing to seed your initial account with.”

Clark Campbell, a senior majoring in political science, has made several Pinterest recipes, but one of his favorites is an apple dessert. The apples are hollowed out, baked and then filled with ice cream and caramel.

Robert Munk, 24, from Maple Valley, Wash., uses Pinterest for photography ideas. As a photographer, Munk finds the website resourceful, not for browsing purposes, but instead as a convenient way to organize his photography ideas.

“I’m usually a first-generation pinner,” Munk said. “I go out and get things from other sites and pin them. It’s nice to have all of my stuff in one place.”