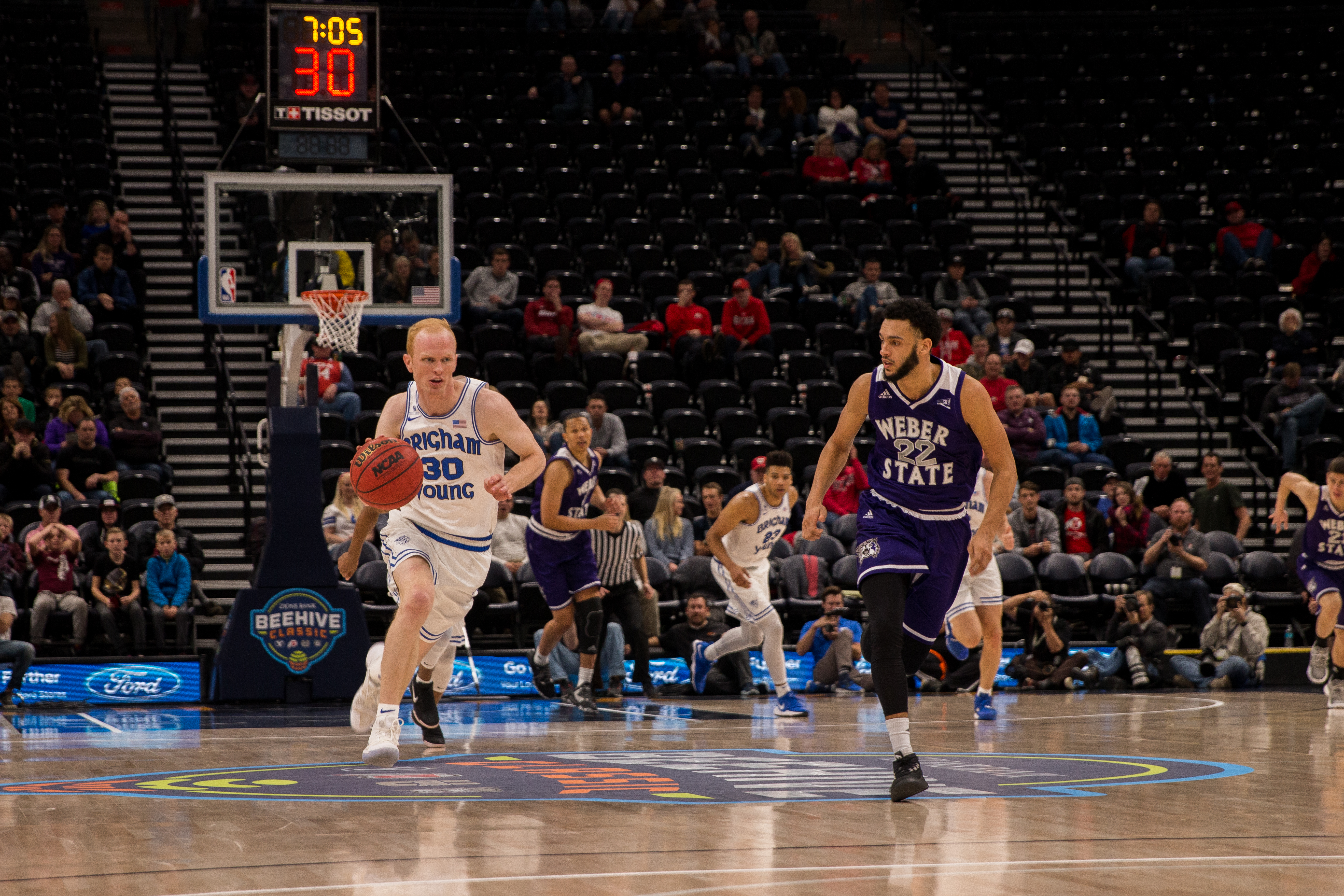 TJ Haws led five Cougars that scored in double figures as BYU held on for a 74-68 win over Weber State in the inaugural Beehive Classic in Salt Lake City.

The game was played the Vivint Smart Home Arena, the second time this season the Cougars have played in an NBA venue.

Both teams were without key players; Weber State was missing Zach Braxton and Brekkot Chapman while BYU missed Dalton Nixon, which forced the teams to play smaller lineups.

BYU’s defense was “lethargic,” in the words of coach Dave Rose, allowing open shots on the perimeter.

Midway through the first half, TJ Haws and Elijah Bryant hit 3-pointers to give the Cougars a five-point lead.

Several defensive stops in a row, now known as “kills” thanks to coach Heath Schroyer, allowed the Cougars to keep Weber State at bay.

McKay Cannon, a Weber State transfer, hit his first 3-pointer of the game to give BYU its largest lead, 24-16, with 9:30 left in the first half.

“It was crazy, I’m still kind of shook right now,” Cannon said on facing his former team. “I still love those guys, so I was battling emotions.”


Weber State’s Jerrick Harding hit double-figure scoring for the Wildcats early but got little help from the supporting cast on offense.

Haws hit BYU’s sixth 3-pointer with 6:28 left in the first half to give the Cougars a 30-22 lead and force a Weber State timeout.

The Cougars struggled to score over the final minutes of the first half, giving the Wildcats a chance to bring it back within four.

The first half ended with BYU’s eighth turnover and a close 36-32 scoreline.

Harding single-handedly kept the Wildcats in the game in the first period, going 8-for-13 from the field and a game-high 16 points.

Jerrick Harding closes in on BYU's lead as he has 16 points in the first half! #BYUvsWEB #beehiveclassic pic.twitter.com/Kv9MpoEy0D

“Harding had a chance to show off all his skills,” Rose said. “He had half of their points at halftime – gave them confidence and belief.”

Haws led BYU with eight points and three assists, while Yoeli Childs had six points and six rebounds in the half.

The Cougars played a tight seven-man rotation in the first half, with sixth-man Nixon out of the game with a foot injury.

BYU opted to start a smaller lineup to match Weber State in the second half, with Seljaas taking Worthington’s spot on the floor.

The Cougars had four quick turnovers to start the second half, and the Wildcats took advantage, taking a 41-40 just four minutes into the third quarter off a 9-0 run.

Harding quickly passed the 20-point threshold for the Wildcats, and got help from Dusty Baker and Ryan Richardson on offense.

Back-to-back threes by Bryant and Haws put the Cougars on a 6-0 run, who pulled ahead once again at 46-41.

The Cougars stayed hot, pushing their run to 12 points, while allowing only three Wildcat points in the same span.

Bryant and Haws hit double-figures during the run, leading the Cougars with 13 and 11 points, respectively, with 11:57 left in the game.

The Cougars had no issues shooting the ball, making over 60 percent of their shots from the field and from 3-point range for the first 30 minutes of the game.

The Wildcats kept the game close by forcing turnovers – 14 on the night – and scoring in the paint (36 points to BYU’s 26).

When Bryant went to the bench after a charging foul, it looked like momentum would swing in favor of the Wildcats, but patience on both ends of the court allowed for the Cougars to remain in control.

BYU continued to share the ball, finishing with 13 assists on the night.

Weber State brought the game within two in the final five minutes of the game.

Bryant’s second charge of the night sent him back to the bench soon after, giving the Wildcats even more confidence.

Haws hit two free throws to extend the lead back to four, however, with under four minutes to go.

The sophomore guard then hit a clutch 3-pointer to give him 20 points on the night.

Childs extended the lead to 68-64 at the free throw line, but missed a fadeaway in the post to allow the Wildcats to pull back within two points with under a minute left in the game.

Yoeli made up for the missed shot by blocking Weber State’s attempt to tie the game.

The Wildcats were forced to foul with under 30 seconds to go, sending Bryant to the line.

Harding drove hard at former teammate Cannon on the next possession, drawing the foul and making both free throws at the line.

Weber State then fouled Haws two possessions in a row, and he sunk all four free throws to give the Cougars a 74-68 lead. He finished with 24 points, going 4-of-6 from 3-point range.

Hardnett got his third steal of the night on the last possession, and the Cougars dribbled it out to improve to 8-2 on the season.

“I feel great about this team,” Haws said. “It’s good to win games like this where we have to grind it out .”

The team now looks forward to their final in-state matchup of the season against Utah next Saturday, Dec. 16, in Provo.

“We’re getting ready for conference play, so it should be a good matchup for us,” Rose said of the game against Utah.

The game tips off at 9 p.m. MST and will be broadcast on ESPN2.