The BYU men’s swim team is filled with some of the leanest athletes with the biggest appetites. On average, each member consumes 10,000 calories a day while in training.

Because swimmers are among the most elite endurance athletes on the planet, they depend on high amounts of energy to compete. That means consuming a lot of food.

“Swimmers obviously need more calories than normal people,” said swimming and diving Assistant Coach Yolanda Bates. “Because they’re burning so much energy while they’re swimming, it’s important that they replenish as much as possible. (When) we double up our practices, I expect these guys to be eating like a horse.”

After their three-hour morning practices beginning at 5:30 a.m., the Cougars often go to the Cannon Center to fill up and replenish depleted energy.

“Growing up, I always kinda felt like Oliver Twist when it came to meals. Whenever I asked for several more servings the answer was always, ‘There isn’t any more,'” said freshman freestyle swimmer Conner Stirling. “I love the Cannon Center because there, the answer is either, ‘Yes, you can have more,’ or, ‘You don’t have to ask; it’s all-you-can-eat.'”

The total weight of each swim team member’s meals in a day turns out to be around a whopping 10 pounds. That means that if they continue at the same rate for a whole year they will consume 3,650 pounds each — as much as an 18-foot long boat and trailer combined. According to the U.S. Department of Agriculture, the average American eats around five pounds a day and 1,996 pounds a year. That means the BYU men’s swim team members are eating double the amount the average American eats, which gives perspective into how hungry they must be throughout the day. 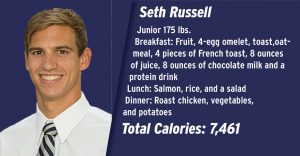 which can burn between 6,000 and 10,000 calories. In comparison to running, which burns around 600 calories an hour, swimming definitely works up an appetite.

“Swimming is not easy; in fact, I think it’s the hardest sport on the planet 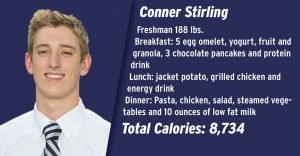 ,” Bates said. “These guys are really lean; you wouldn’t believe they could eat so much just by looking at their bodies.” 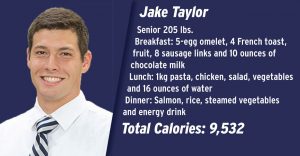 weight among the 21 male swimmers is 175 pounds. The heaviest male swimmer weighs 210 pounds, with the smallest weighing 145 pounds. That means that on average, these swimmers eat their body weight in food every 17 1/2 days. 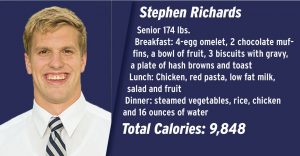 “People don’t realize all the time and effort we have to put into (a diet), especially if we want to eat more than one kind of food.”

The team practices two to four hours a day, six days a week. Aside from swimming about eight miles every day, they also include cross training into their practices, like running, weightlifting, dry land core workouts and a little bit of yoga. If you get up 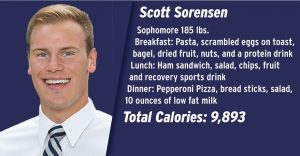 The team decided to make the end-of-season banquet a competition to see who could eat the most in weight. They weighed themselves 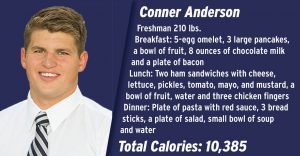 before and after eating to see how much weight they had gained when the banquet was over. After eating buffet style for an hour and a half, and raising some eyebrows in the process, the winner was sophomore Scott Sorensen, who gained seven pounds in less than two hours.

“The ability to eat lots of food is the biggest motivator to swim,” Sorensen said. “Rewarding myself with food accomplishes two things: (it) replenishes my body with needed sustenance and motivates myself to swim hard to burn off the sustenance I ate.”

The banquet wasn’t the team’s first eating challenge. Three years ago, two swimmers accepted Brick Oven’s giant 12 pound pizza challenge and came the closest anyone has ever gotten to completing it.

“I think they were sick for a while afterwards,” said head coach John Brooks. “The manager told me they got the closest to finishing it than anyone else he’d seen try it.”

Although the swimmers are good at eating, they’re even more impressive at swimming. They’ve won three consecutive conference championships in the last three years and had two swimmers qualify and compete at the 2016 NCAA championships in Atlanta this year. Six BYU swimmers have qualified for the Olympic trials and will compete there at the end of this month in Omaha, Nebraska.

The swim season will begin in October and runs until mid-March. You can follow the swim team at the team’s website, byucougars.com/home/m-swimming-diving.

Jake Taylor is a former member of the BYU men’s swimming team. He narrowly missed out on a chance to participate in the 2016 Olympics in June.