The excitement of the NFL draft isn’t limited to those who hear their names called. The euphoria extends to sobbing parents, high-fiving team executives and hopeful fans renewing the annual pattern of believing that this is the year that (insert favorite team) finally breaks through to the Super Bowl.

The draft can also validate the national legitimacy of college football programs as hotbeds for NFL prospects. If National Signing Day demonstrates how effective a coaching staff is at attracting talent, the NFL draft showcases how effective they are at developing and maximizing that talent.

The 10th draft since both BYU’s Bronco Mendenhall and Utah’s Kyle Whittingham became head coach will commence later this month and will also mark the 10th draft since former Aggie head coach Brent Guy took the reins at Utah State in 2005. In other words, the 2015 draft gives us the chance to analyze each program with results from a nice round number of years.

Since the following is intended to serve as a precursor to the upcoming selections, and in order to stick with the “decade” theme,

I’m including the draft class from 2005 in our analysis (which took place five months prior to the first games for Mendenhall, Whittingham and Guy as head coaches).

But before we hop into the Delorean and begin traveling back through recent history, here are a few things worth mentioning.

Thing worth mentioning No. 1: Obviously, the number of NFL draft picks a college produces doesn’t automatically equate to on-the-field success. But it is one of the indicators of it.

Thing worth mentioning No. 2: I’m only analyzing BYU, Utah and Utah State players that were drafted by an NFL team. Undrafted free agents who failed to impress NFL teams in college aren’t considered. This eliminates guys like Vikings’ running back Matt Asiata and Patriots’ defensive tackle Sealver Siliga, former Utes who have worked their way to a starting role in spite of having gone undrafted.

Thing worth remembering No. 3: Remember that NFL scouts can (and do) get it wrong when evaluating a player’s NFL potential. Some “can’t miss” draft picks turn out to be absolute busts, while misjudged undrafted free agents go on to have incredible story-book careers (see: Lewis, Chad). But “flops” are labeled such because of the high expectations they engendered at the college level. So the fact that John Beck‘s NFL career was short-lived doesn’t diminish the positive impact he had on BYU’s program.

And now without further ado, here’s a quick look at how effective the BYU, Utah and Utah State football programs have been at transforming high school recruits into NFL-caliber draft picks.

I’m not sure what’s more surprising; Utah State’s 37-17 overall record from 2011-2014 — which is best in state — or the fact that there have been more Aggies drafted (8) than Utes (7) and Cougars (2) over that same four-year span, a number equivalent to the number of Utah State players drafted in the combined 22 years previous to 2011.

And it’s not like they’re getting by on a measly diet of sixth and seventh-rounders — we’re seeing a steady pattern of third- and fourth-round picks being pumped out of Logan each year.

So how has Utah State gone from an afterthought to the program known for developing guys like Bobby Wagner, Robert Turbin and Nevin Lawson?

Most would point to the arrival of Gary Anderson in 2009, who directed the Aggies to their first winning season since 1997. In his fourth and final year, Anderson led the program to its first conference title in 15 years, its first bowl game victory in 19 years and its first double-digit win season since … wait, let me check … oh yeah — Utah State had never had a double-digit win season prior to 2012. The fact that Anderson’s four recruiting classes yielded five NFL draft selections was mainly an added bonus to the impressive run.

But don’t make the mistake of overlooking the job Brent Guy did in bringing NFL talent to Logan. Sure, his 9-38 record as head coach from 2005 to 2008 may not look all that impressive, but four of Guy’s recruits would go on to be drafted (although he would only be around long enough to see one of his players — Shawn Murphy — selected in the fourth round of the 2008 draft).

We’re not yet deep enough into Matt Wells’ tenure as Aggie head coach to see whether his recruiting classes can keep up the pace established by Anderson and Guy, but the uptick in both winning percentage and draft production should help Utah State’s image as a quality destination for recruits. Make no mistake about it — being able to showcase a program as an NFL pipeline is a high selling point for a lot of top high school athletes. Wells may never be able to consistently lure the four- and five-star recruits to Logan, but overlooked talent and seasoned junior college transfers should continue to fit into the program nicely as it seeks to continue the upward trend.

As with most subjects that concern BYU football, the Cougars’ 2005–2014 draft data can be interpreted either with a “glass-half-full” or “ glass half-empty” perspective. You get to decide.

With high academic standards and a strict honor code, BYU has never really been expected to be able to consistently recruit the kind of talent that most schools from Power Five conferences do. But Cougar fans are lying if they say it’s out of the question to at least match the draft production of teams like Idaho and Temple.

Although putting players into the NFL isn’t one of Mendenhall’s official team goals, consistently finishing the year in the top-25 rankings is. You obviously need a number of talented players to accomplish that, but how many on average?

By calculating the average number of NFL draftees produced by the schools that most consistently finish in the top-25, the key ingredient for sustained success begins to emerge.

Of course, the Cougars themselves finished the 2009 season in the AP top-25, with both Pitta and Unga being selected in the corresponding 2010 draft. They were also able to finish in the top-25 during four consecutive seasons from 2006 to 2009, accomplishing the feat with six players drafted during that stretch, or 1.5 per year. So Mendenhall has proven that he can achieve more with less talent when compared to the rest of the college football world — he just needs to prove that he can find the little bit of talent necessary to reach that next level.

As the number of draft selections has declined, the number of BYU’s “successful” seasons has correspondingly stagnated. The Cougars will need to get back to recruiting future NFL draft picks at a consistent pace, not only for the immediate on-the-field improvement but also to reassure recruits that they still possess the skills necessary to help them reach the NFL. 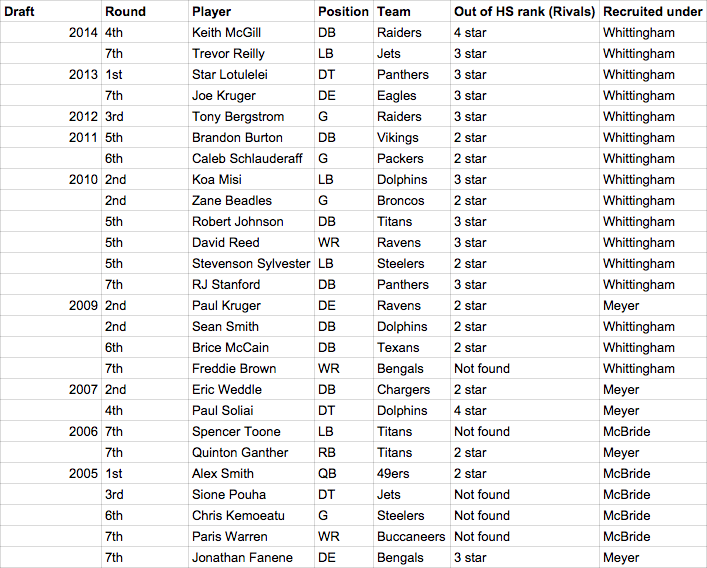 Those who expected Utah’s recruiting success to diminish with the departure of Urban Meyer were sorely mistaken. In fact, the number of Utes drafted from 2010 to 2014 is the same as were drafted from the BCS busting days of 2005–2009.

studs. The majority of Utes drafted from 2005 to 2014 were initially rated as a “two-star” recruit out of high school by Rivals.com. A two-star recruit really isn’t expected to do anything special aside from providing depth and some playing time as an upperclassman.

The most notable two-star recruit Utah landed is Alex Smith, who surprisingly wasn’t recruited by either Whittingham or Meyer, but by Ron McBride. By replacing McBride in 2003, Meyer basically had the perfect prototype to lead his innovative spread offense fall right into his lap. Smith defied the scouts by carving up defenses on his way to becoming the No. 1 overall pick in the 2005 NFL Draft. Similar two-star success stories include those of Eric Weddle, Sean Smith, Paul Kruger and Zane Beadles.

But with their inclusion into the PAC 12 conference, the Utes may no longer need to rely on their uncanny ability of finding diamonds in the rough. Since 2012, players with the lowest star classification to be drafted have been three-star recruits. And since joining the PAC 12 in 2011, Whittingham and his staff have only signed an average of about four 2-star recruits per year. Meanwhile, the average number of three-star recruits has increased from 11 in 2006–2010 to almost 17 from 2011 to 2015. The ability to recruit future draft picks appears to be on the rise at Utah. They’ll need exactly that if they intend to accomplish more than a yearly fourth-place finish in the PAC 12 South.