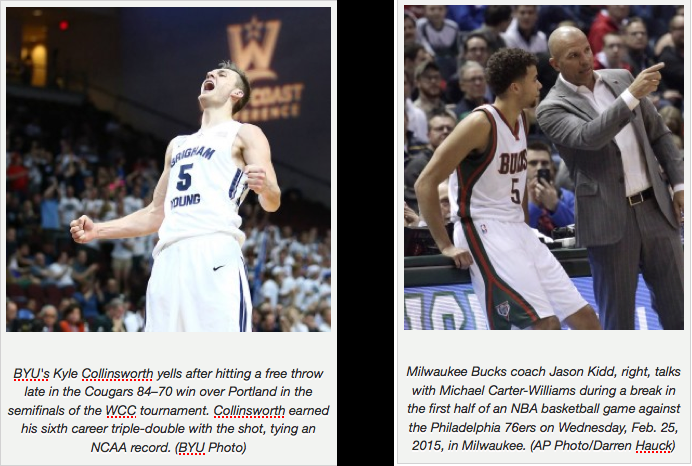 “People are disappointed when I don’t get a triple-double, but it’s been fun, having the fans expecting me to get at least a double-double if not a triple-double,” Collinsworth said in a March 10 interview with ESPN.

Collinsworth broke the NCAA single-season triple-double record in a Feb. 7 game against Loyola Marymount. Among the players he surpassed was former Cal point guard Jason Kidd, who played from 1992 to1994 before going on to have a decorated NBA career.

Kidd achieved four triple-doubles in his 1993–1994 season, but that wasn’t all he was known for during his last season at Berkeley.

“Basketballs are 9.39 inches wide,” said NBA reporter Zach Harper. “If (Kidd) had a window of 9.4 inches to throw it through with a bounce pass or just by whipping it through the air, he would deliver it almost every time.”

Kidd was a magician with the basketball. The phenomenal ball-handling skills he possessed allowed him to consistently set up teammates for success.

Collinsworth may not have the same level of ball-handling skills Kidd had, but he has shown that he knows his team and how to use his own skills to maximize its success.

“Everybody was yelling, all the BYU fans were yelling while I was shooting it, so it was good. I’m glad (the ball) went in,” Collinsworth said in an interview with BYU’s Sugene Lee after recording his sixth triple-double on March 10. “All the credit goes to my teammates. We have a lot of shooters, and Chase made a ton of threes. Our teammates and our pace, it makes it easy to get a triple double.”

It’s tough to declare which point guard had the better college career simply by comparing stats. Collinsworth has currently played one collegiate season longer than Kidd and has doubled him in rebounds, surpassed him in points and is on his way to matching his number of recorded assists.

The two players are much more than their stats, however, as both helped their teams earn NCAA tournament berths in every season of their college careers.

“There will be plenty more opportunities, and I look forward to Kyle helping our team in all the ways he helps our team,” BYU coach Dave Rose said in a February webisode with KSL.

With the NCAA tournament fast approaching, watch for Collinsworth as he continues to display his versatile skill set on the sport’s biggest stage.