Though summer is in full swing, fall semester will be here before we know it, and a must-have item for every BYU student is the ROC Pass, which will serve as a gateway to sporting events, school spirit and camaraderie.

Named after the “Roar of Cougars” student section at BYU sporting events, the ROC Pass is the new and improved version of the All-Sport Pass.

The main difference between the All-Sport Pass and the new ROC pass is the addition of the ROC at football games. In the past, BYU students were dispersed around LaVell Edwards Stadium, seated with a group they signed up with while buying their All-Sport Passes.

With the new ROC Pass, student seating at football games will be first come, first serve in designated sections of the stadium. Rather than scrambling to put together a group to sit with all season, students will now be able to go to games with whomever they want.

For those students who would prefer to have an assigned seat for every football game, that option is still available.

Many students are excited about this new opportunity to come early and get the best seats in the stadium. Grant Smith, a sophomore from Heppner, Ore., is one of those students anxious for football season to start to experience the new student section. 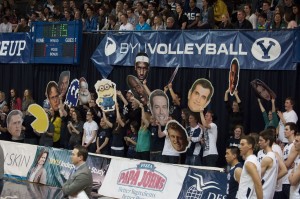 “I like it,” Smith said. “I think it will reward the more dedicated fans with better seating rather than leaving it to chance. Also, I like the location on the sideline. It will make it harder on opposing teams.”

The ROC Pass will give students admission to 21 sports and other events throughout the year, including men’s basketball, which is BYU students’ go-to sport for camping outside the Marriott Center in order to get the best seat possible; men’s volleyball, which consistently has one of the highest attendance rates in all of college volleyball; and women’s soccer, which packs the stands at South Field at nearly every game. Women’s basketball and volleyball games, as well as gymnastics meets, can also be enjoyed with the ROC Pass.

The ROC Pass is not necessary for all NCAA events on campus. Men’s and women’s tennis, swimming and diving and track and field events generally don’t require passes or tickets for admission.

Although the ROC Pass will gain students admission to most sporting events, it does not apply to extramural and club sports such as rugby, men’s soccer, men’s and women’s lacrosse and hockey.

Regardless of sport, BYU students come together to support their school and teams, which is a major reason that freshman Jessica Sorge loves to attend many different games. Sorge, a sociology major from Temecula, Calif., loves attending football games in particular.

“It makes for an easy and fun thing to do, especially if you don’t have a car,” Sorge said. “The best part is the school spirit, the unified student body encouraging our team to do the best they can.”

The ROC Pass will be available for purchase on July 10 for $115 for the general admission pass. A guest pass will cost $150, and the reserved-seating pass is $180. After August 4, the passes are an additional $10.