The Cougars dropped the second match of their back-to-back home opener Saturday night 4-0 to the Fresno Fuego.

The loss was their fourth straight, dropping their record to 1-4-1 on the season. Despite the outcome, BYU looked good for most of the match.

“It’s so hard because we played so well,” coach Chad Sackett said. “We out-possessed them the first half and had the same amount of shots. You see the score as 0–4 and think we got killed, but we didn’t. That’s the hard thing.”

The highlight of the match for the Cougars was goalkeeper Brian Hale. Despite letting in four goals, Hale had 11 saves. The Fuego’s offense had many chances to score but was repulsed again and again by Hale and his defense, including a few spectacular diving saves. 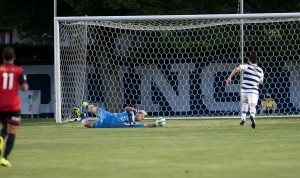 BYU started the game a little sluggish and allowed Fresno to challenge Hale on multiple occasions. The Fuego scored on a breakaway in the 11th minute, and again in the 24th after Hale was forced to challenge a Fresno forward, leaving the right side open for a streaking teammate.

The Cougars’ defense stiffened after that and didn’t allow another goal until a free kick in the 72nd minute. A Fresno forward was left unmarked in the box, and his header sailed just over Hale’s head. The Fuego sealed the victory with a deep shot from outside the box in the 87th minute that slipped through a diving Hale’s fingers. 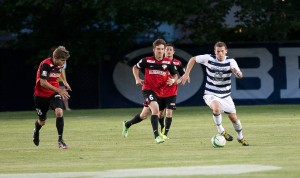 Fresno was able to make the chances they were allowed, in contrast to the Cougars, who were unable to capitalize on the chances and mistakes of the Fuego defense.

BYU has been held scoreless in four of its last five matches.

“We are going to struggle scoring,” head coach Chris Watkins said. “You can ask me every game this season, we are gonna struggle.”

The Cougars tallied 12 shots, but only three challenged the Fuego keeper.

BYU will stay in Provo for next week’s home match on Saturday, June 8, against Real Colorado. Kickoff is scheduled for 7:30 pm on South Field.