This weekend the Cougars spread out over four different meets, competing in the arena that best suited their individual events. Athletes will compete in the Cal Multi-Event Meet, the UVU Invitational, the Texas Relays and the Stanford Invitational.

The UVU invitational took place on Friday and the local competition and facilities were capped by perfect weather. For the men, Kyle Baker and Chase Dalton represented the Cougars by taking first and second place in the javelin throw. Winston Wilkinson and Jacob Foutz took first and second, respectively, in the men’s discus competition. Dennis Christensen took first place and set a new career-best mark in the shot put. Scott Matheson took first place in the triple jump and it was only his second time competing in the event. 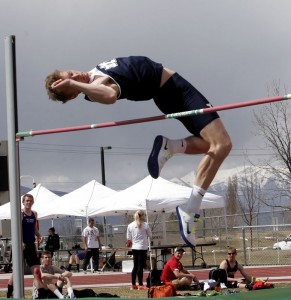 “We were lucky to have some really good weather today and I was really pleased with our guys,” men’s coach Mark Robison said in a press release. “I was really impressed with the way we competed and it was just good to get this kind of repetition in this early in the season.”

During her first race of the outdoor season, Kelsey Brown finished 10th in the 800-meter run with a time of 2:07.40. Brown finished fourth in her heat. Rachel Fisher and Melissa Keltner both finished second in the pole vault (3.80m) and the triple jump (11.42m). In the 5,000-meter race, Natalie Shields placed ninth overall in her section with a time of 16.55.33.

Overall, the athletes excelled in their various events at the various meets and last weekend turned out to be a great outdoor weekend for BYU track and field.