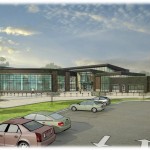 Provo’s director of Park and Recreations says the new Provo recreation center features new equipment. Some rec-goers are concerned about the new pricing while others are glad to pay a little more for a new facility.

With the new amenities city officials will raise prices from about three dollars a visit to about five dollars. Annual family passes, once just under two hundred dollars, will increase to almost five hundred dollars.

Rec swimmer Ben Stevens said, “Probably the purpose of the community center in the first place (is) for the community to use it to be active and enjoy the facilities. It would be a shame if people couldn’t use it due to the extreme cost.”

The new rec center will include five added pools, four full gyms, tennis courts, climbing walls, spinning rooms and a skate park. With the new features, prices were raised based on the standard rates of surrounding facilities in Orem and Lehi.

Recreation division director Scott Henderson said this new center is exactly what the community is asking for.

“Familiarity will help as people are able to see the new facility and buy into what they receive. I think the value supersedes the fee,” Henderson said.

The new facility will offer financing and sponsorships for low-income families that wish to attend the facility.

Directors say the new rec center will open the spring of 2013.