It’s the second season in the post Jimmer Era, and Matt Carlino’s second season filling those big shoes as point guard. Coaches and teammates are excited with improvements they have seen Matt Carlino make over the off-season.

It’s Tyler Haws’ first season back after his mission and he says that the biggest change in the team is the experience level. Before he left he played with upperclassmen, but he’s returned to a much younger team with only 3 seniors—2 of them in the back court. Matt Carlino is a sophomore, just like Haws. However, Haws says that age is nothing but a number.

“I’m very excited about our back court. I feel like we have really talented guards who play really well off of each other and Matt’s playing so well right now. He’s playing fast, and when he plays fast everyone else runs alongside with him and we’re a lot better team; so I’m really excited about the back court.” 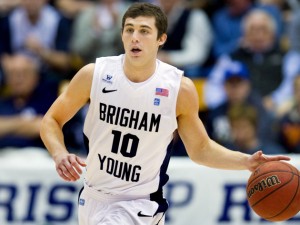 A lot of guards saw playing time against south eastern Oklahoma state, but there are more guards than there are starting spots, and that means that some players will be coming off the bench. Matt Carlino made some speculations about what guards might see some playing time.

“Tyler took two years off, but he’d played a year before. Raul has been looking good so far. He obviously hasn’t been here like the other guys, and neither has Cory; so they’re still learning but they both look good,” says Carlino.

Coach Rose says he won’t know what guards will start for sure until after a couple of games. Rose says there are 9 or 10 team members that could potentially start, but Captain Haws is a safe bet for shooting guard, and senior Brock Zylstra and Carlino will definitely be at point.

The guards say that it won’t matter who starts, however. They’re friends on and off the court and play well together. There’s an even balance of experience and those willing to learn from it. Brock Zylstra and Matt Carlino know the offense well and it is clear that Haws, Juco transfer Delgado, and freshman Cory Calvert are having no trouble fitting in.