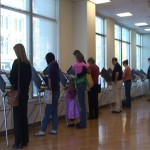 Thousands of Utahans have already cast their votes, but those using absentee ballots will find their vote might take a little longer to be counted due to problems with a misplaced barcode.

Each ballot has to be scanned individually to be entered into the computer; this might make the process take longer in Utah County.

Utah County Clerk Bryan Thompson says this is second to his concern with the flood of online and early voters Utah County had. He is working to send votes in by Election Day.

“Who has the priority?” Thompson questions. “I’m doing this for my job, not campaigns.”

Political campaigns may not be able to use this information and Thompson says they are furious.

Utah County says they have already sent out twenty two thousand absentee ballots and that this glitch won’t affect the votes getting in by Tuesday’s election.

The ballot vendors from Seattle sent in a team to help organize the barcode hiccup.

Thompson assures all votes will be counted even if the process may have slowed down.

Over the weekend Utah County took in 7,000 ballots. Thompson says that those voters are first priority.