It was Cougar against Cougar when basketball season tipped off this week. Blue took on white, to give fans a sneak peek of what to expect as the season gets going. Each team had an even mix of experienced players and rookies. Sophomore Tyler Haws is back from his mission and led the blue Cougars to an 80-74 victory over the white team. 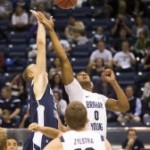 Sophomore Allyson Morgan said, “I’m super excited for the next season. I think Davies is looking great. We got a couple great new players off their missions and we got a couple great freshmen. I think it will be better than last year.”Senior Brandon Davies led the white team with 20 points, but due to a fall he took on his hip, he rode the bench for the entire second half. H

e said that he wished he could have played, “I really wanted to play but coach thought it would be in the best interest of the team for me to sit out the blue and white game just for a half.” However, even though the senior was absent from the court for the final twenty minutes, the energy from the stands was present and accounted for.

Fans who hung around after the buzzer were rewarded. They got free BYU basketball postersand an opportunity to go onto the court and have the players sign the posters. Many fans took advantage of that opportunity. The line for autographs went out the door. Morgan said, “I think getting the autographs was the coolest part. The line was a little long but it was definitely worth it.”

The Cougars will dance with someone other than themselves tonight. Be at the Marriott Center at 7PM to see the cougars take on Southeastern Oklahoma State.