There’s a new, growing tradition at BYU. Imagine taking a ward dinner out into a parkin

g lot and adding football. That’s exactly what tailgating is. The experience allows for 4 quarters of football to last much longe

r. Fans show up hours before kick off and play paper football, watch college game day on a big screen TV, and eat tons of food.

But BYU sophomore Robbie Huckvale says that’s it’s more than food and games for him, “It’s not only the great food, watching the games, playing the games that we have set up, but also being able to gain friendships. I think it’s the friendships and relationships you build with fans, not only BYU fans, but fans that come to visit.”

The tailgaters even have a motto: ‘Come early, stay late, and eat a lot.’ They hold the tailgates in the parking lot of Sports Unlimited—a parking lot that can accommodate 22 RVs, so fans have the option of spending the night before the game in the lot, too! 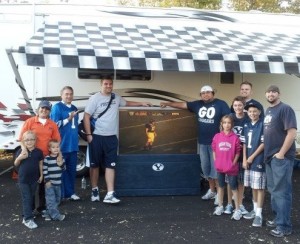 The people that plan these events make extra efforts to invite tailgaters from the opposing teams, too. They have facebook pages, they send out tweets, and invite people through their own Cougar Center Web Page. At the last tailgate against Oregon State, a handful of opposing fans showed up. Jason Barker was one of those fans and he loved the atmosphere in Provo. Barker shared, “This is very energetic and I would say more openly welcoming to me. Most tailgates are welcoming to opposing fans, (but) this one went out of their way to welcome my wife and me.”

The next tailgate will be on November 10. This is when the Cougars will host Idaho.