Provo – In 1994, the Cougars defeated Notre Dame’s Fighting Irish for the first time, led by running back Jamal Willis.

Tomorrow, the Cougars return to South Bend, Indiana with another Jamaal at running back. This one’s a freshman, looking to write his own name in the history books.

Jamaal Williams has made headlines for being the youngest player to score a BYU touchdown, but this week it’s his similarities to BYU all time leading rusher Jamal Willis that’s got people talking. 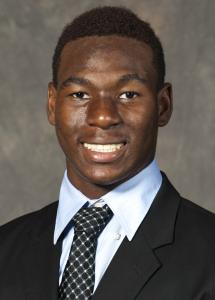 “Well, it’s kind of weird that my name is close to his because my name is Jamaal Williams. Since I got here, everybody keeps saying, ‘You’re the next Jamal Willis’ or ‘Are you Jamal Willis?’ No, but I know who he is,” Williams says.

Since he came here this fall, Williams has been looking to Willis’ example. He’s even coached by BYU Assistant Football Coach Lance Reynolds, who also coached Willis. Reynolds recognizes William’s potential to grow into another great BYU running back.

“He has gifts, athletic running back gifts,” Reynolds says, “which make him a special young man. I see a great future ahead of him. Where it all unfolds, we can’t say, but I see no limits for him right now.”

Williams knows where he wants to end up: in the NFL, like Willis did when his career ended with the Cougars.

“My dream is to make it to the NFL, and since he made it, I think that if I follow into his footsteps…that I might make it too,” Williams says.

The next step on that journey for Williams is to make like the Jamal of the past, against the Fighting Irish of the present, tomorrow afternoon. The Cougars kick off at 1:30PM.