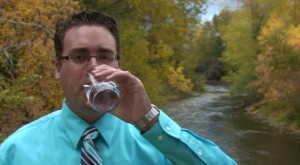 We use it from sunrise to sunset; water is essential for virtually all aspects of life, including cooking, hygiene, sanitation, hydration, landscaping, and personal health in general. It is arguably earth’s most precious natural resource.

Citizens of Provo City are in the uniquely advantageous position of being located near several viable fresh water sources, including Deer Creek Reservoir, the Uinta Mountains, the Provo River, and nearly ubiquitous ground water. This affords them pristine-quality tap water at an affordable price.

Bart Simons, manager of water sources for Provo Public Works, oversees 15 deep wells and nine booster pumps stations throughout the city, as well as other delivery mechanisms. All of these systems serve to deliver clean tap water to the more than 112,000 people who reside in Provo.

“Water is a part of everyone’s life,” Simons said. “People may be used to the power going off occasionally, but what they really tend to get upset about is if the water goes off for any reason.”

Provo Public Works says that the less customers have to think about their tap water, that means the city is doing their job well. “Anonymity,” Simons said, “is our victory.” Lack of public concern about water indicates municipal success. “Whenever people have to think about it, that’s when there are problems,” he said.

Though lack of adequate clean water is not as big a problem in the United States as elsewhere in the world, Americans have an equal responsibility in water preservation and conservation.

Las Vegas native Danica Jorgenson has observed a stark contrast between her hometown and Provo in how people use water. “People just don’t seem to notice the waste of water, and I think a lot of it is lawn care…you only water the grass in Vegas once a week, whereas I feel like here they water it twice a day,” Jorgenson said.

Provo city estimates that each individual person locally uses an average of 200 gallons of water per day, a shocking statistic to all who have heard it. Experts like Simons hope this knowledge will awaken consumers to the need to cut back on wasteful habits and adjust their lifestyles to conserve water. As people make changes, we can decrease the risk of depletion and ensure a stable future supply.