Tomorrow for homecoming, fans and players alike will be wearing black, and they are excited about it. Some words used to describe this blackout are fun, tight, different, and totally awesome. It’s not the color the cougars are used to wearing, but they aren’t blue about going black. 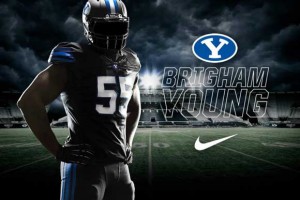 Jamaal Williams explains that black is nothing new to him, and he is confident that the cougars will be looking good, “It’s black–I’m black so it’s not going to be a new different type of skin for me so I just like these new uniform things, we gonna look real good in black though.”

James Lark adds to the skeptics, that they are not straying too far from tradition, “We’re changing the color a little bit but we’re still wearing the traditional uniform. Everything else is the same and so we’re sticking with tradition, which is what BYU is all about; but we’re doing something fun as well.”

There are few skeptics in the student body. Most are looking forward to this blackout. Junior Jacob Fryer thinks it could add an intimidation factor to our football team, “It’ll be cool to have all black and just kind of show Oregon State how tough we are and that we’re not going to back down against them.” Brandon Driggs adds that this blackout is just another way to add to fans’ fun, “We’ve done blueout and whiteout; I don’t think it’s a bad thing to do a blackout. I think it’ll look really awesome.