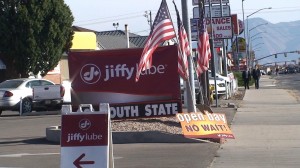 The council began discussing temporary sign enforcement last December and business owners joined the discussion for more than seven months.  But last night 4-3 vote means most Orem businesses can only have two portable signs along university parkway and none along state street. The city will continue to allow banner, holiday, and window signs but no street side temporary signs.

Currently, the Orem city code allows banners on the wall of main buildings; temporary signs are limited to thirty days per year.

Under the new change, businesses can have two portable signs along University Parkway, depending on the size of the street, and not any along State Street.

“It was a compromise but I’m not completely happy with it. Yes, it doesn’t affect my business directly but I’m a citizen here and it does affect them,” said Carlos Iglesias owner of Ken Garff on University Parkway.

Business owners like Iglesias fear taking away signs will impact sales in Orem.

“They are worried about the beautification, but the city is losing in an economy that’s like this,” Iglesias said.

The chairman says this is a step forward for the community.

“I do not believe this will affect businesses, because if you have a good business people will come,” Orrulian said.

Temporary signs on University Parkway larger than sixteen square feet will be enforced by a complaint basis.