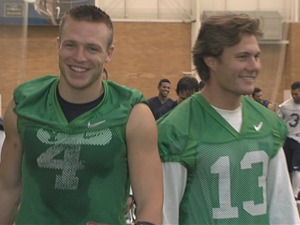 Riley Nelson’s ailing back meant that Taysom Hill got the start last week against Hawaii. But will the freshman get the call against the Aggies tonight? Hill says that he will.

“I think the plan right now is for me to go on Friday against Utah State, and unless something changes then I think that’s what’s going to happen.”

But the decision is Bronco Mendenhall’s, not Hill’s. And Mendenhall says that the starting position belongs to Riley Nelson once he is feeling well enough to get back in the game. Nelson says that could be as early tonight.

“Knock on wood…Definitely next week and hopefully, I would say there’s a big chance this week,” says Nelson.

When a situation like this arises, there can be teammate tension, but Riley and Taysom say that this isn’t the case for them. They have a close enough relationship that they describe it as familial. Riley says that the similarities he and Taysom share unite them.

Taysom feels equally kindly about Riley, “I definitely look to Riley as a brother. I love the kid. He’s been a great mentor on and off the field.”

We don’t know at this point who will start, or what the rest of the season will look like, but we do know that there are no hard feelings between the two boys, and that whoever starts as quarterback tonight will be healthy.