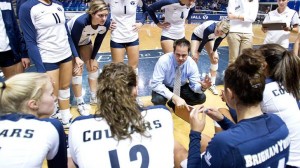 After suffering their first loss against Saint Mary’s on September 29, BYU Women’s Volleyball is forced to re-evaluate their game. BYU had a winning streak of 15 straight games. The team played on Saint Mary’s home court and lost the match in four sets. After the break between the second and third sets, the cougars came back to win the third, 25:19, but even that was not enough.

Freshman Outside Hitter, Kimberly Dahl said of the game, “After looking at film and stuff from that game we figured out we just didn’t really play the way we have been playing.”

Saint Mary’s is a tough team to play. The Gaels starting attackers all had kills in the double digits during that game. BYU just was not able to make a play. BYU´s opposite, Jennifer Hamson, had 16 kills, but it still left the team short of a win.

Hamson said, “They played a good game plan against us, and they took us out of our game. I think it was the first time we really struggled playing our game well.”

The defeat cost the team more than its winning streak. The cougars dropped from a national ranking of 11 to 16.

Fortunately, BYU is facing the loss with an optimistic attitude.

“We’re trying to fight through it and bring the fire back and be ready for Loyola,” Hamson says.

The Cougars head to Los Angeles for their next game against the Loyola Marymount Lions on Thursday October 4.

Dahl says of Loyola, “They beat Saint Mary’s in three so they’re a really, really good team. So I think we’re just trying to learn from what we didn’t do in the Saint Mary’s match and try to apply that in this next game.”

Although Loyola Marymount is not ranked in the top 25, the women’s volleyball team cannot underestimate their opponent.